(Rembrandt's painting, "The Return of 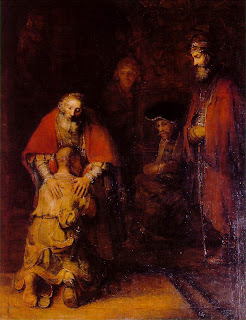 
A family recently suffered a tragedy. Poor judgment was at the crux of the disaster, and as the event became public, people lined up on both sides--some defending the one who had erred, and others who were highly critical. What was most interesting was the venom with which the two camps went after one another.

The nature of the posts suggested that those in support of the parent were people who had likewise suffered a moment of lapsed judgment, although they had been blessed to have escaped tragedy. On the other side were those who felt they had always placed vigilance first, rendering them intolerant of those who had not.

The argumentative volley reminded of a movie called, "The Prodigal Son." It disturbed me the first time I watch it, because it it because it underscored my weak understanding of the mercy component of the Atonement. And here's why:

The movie is a modern re-telling of the Biblical story. A reckless, lazy, irresponsible son takes his inheritance and runs away to play leaving the good, responsible son to handle the family and the family business. When life gets hard for the rebel, he returns home a repentant, more humble man whose life experiences have left him broken and broke.

The father receives him with gladness, setting him back up in the family business, while a storm of resentment builds up in the responsible son who watches his brother appear to have had it all--the folly, the fun, the freedom, and now the same reward.

At that young stage of life and life experience I commiserated with the good older son--the steadfast reliable one who appeared to have been under-appreciated. Now, with more living under my belt, I see things more clearly, though the lessons are more subtle.

I'm so grateful for the Lord's mercy. Only He knows the inner workings of our hearts--the point and moment when we surrender our will and our sins. We may look entirely unchanged on the outside, but fortunately for us all, that's not where He looks for the changes.
Posted by Laurie LC Lewis at 11:52 PM