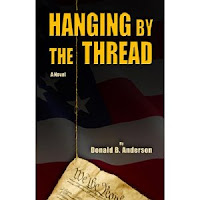 HANGING BY THE THREAD
by Donald B. Anderson

First-time author, Donald B. Anderson, took a risk in tackling a hot-button topic in his debut political suspense novel, Hanging By The Thread. The premise is a chilling race to thwart a plot to topple the U. S. Constitution by a secret, underground group who calls themselves, “The Thread.” This entity has been weaving members into key roles in government and law enforcement, and with one final, unthinkable act, played out in front of numerous, powerful witnesses, the last player is positioned, and The Thread’s plans to reform the United States are initiated.

And that’s only page three.

The plot would have proceeded flawlessly, except for one random blunder that brings a critical document to the attention of an unlikely hero—Colton Wiser—a twenty-something, recent college grad, clerking at the Utah State Capitol Building. Curious about the eerie file that contains strange economic jargon and a disturbing blood smear, Colton seeks advice from two equally-unlikely heroes—his roommates. Jeff is a security guard at the Capitol, and Pete is a grad student with a few economics classes under his belt. Pete eventually draws in his Economics Professor—Dr. Harold Isaacson—and Colton confides in his FBI Agent/ uncle, named Jim. But before the five are even assembled together, danger and mayhem erupt, and the plot’s velocity increases until the end of the book.

Anderson displays his creative chops, employing some slick tricks as his characters attempt to elude and escape The Thread. The author's research into law enforcement, government and economics also adds to the book’s tension and suspense. This first-time novelist shows great skill with plot and pacing. I rose early one morning and went straight for the book, unable to put it down until I had reached the end. His writing style could be tighter and more fluid in places, and the friendly banter between the three roommates’ occasionally slows the read, but these small issues don’t impact the quality of Anderson's pulse-pounding novel.

But it is the economic storyline, the crux of the plot, that will determine readers' opinions of the book. In addition, the last sixty or so pages is a second, extended and didactic epilogue called “The Thread Lectures,” where the book's professor, Dr. Isaacson, explains the dangers of The Thread’s economic policies. While they are more thought-provoking than entertaining, they may be the most valuable part of the book for readers unfamiliar with the economics behind freedom.
The Thread’s plans will seem familiar to anyone who listens to conservative newscasts or talk shows. There’s a Glenn Beck-like feel to the book which strives to instruct as it entertains. In a day when the philosophy of “redistribution of wealth” is bantered about, Dr. Isaacson's character is used to illustrate how such seemingly kinder, generous paths can lead to onerous consequences. Conservatives will love the book. Liberals will likely dismiss its black-and-white economics as too simplistic. Regardless of political persuasion, readers will close the last page of Hanging By The Thread with a renewed understanding of how interconnected political freedom and economic freedom are. And whether readers agree or disagree with the book's point of view, they will get a glimpse into the philosophies and fears driving those of an opposing position. The message that came to me as I read was James Madison’s caution that the Constitution was written to guide a moral people, and that includes how we manage and share our money.

Anderson set Hanging By The Thread up perfectly to accommodate a sequel. I, for one, will be looking forward to reading it.

Hanging By The Thread is available at Amazon.com at http://www.amazon.com/Hanging-Thread-Donald-B-Anderson/dp/159936056X. The author can be contacted at http://www.hangingbythethread.com/contact.html.