IN SUPPORT OF COLUMBUS 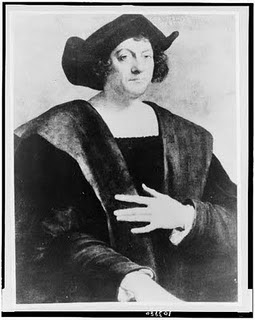 One lesson I've taken away from my historical research is this: we should judge people within the context of their own time. Columbus, the Founding Fathers, and other great innovators of the past are victims of the same curse--having a magnifying glass held up to their errors, their flaws, while blinders obscure their vast, world-defining accomplishments.

Columbus is in the cross-hairs of public opinion--a man even kindergartners are being taught to dislike and revile.
Take, for example, a recent headline for an article about Christopher Columbus: "Kids Study the Dark Side of Columbus. " Wow. It's a far cry from my grade school days when each classroom had a portrait of Washington, Lincoln and Columbus hanging right up front.

Few regard the vision behind these giants without measuring them against today's social sensitivities, in which case they fall short and are damned. Columbus's noble personal motivations for his voyage are all but lost these days. It's sadly true that like so many European explorers, Columbus's party unknowingly carried germs for which the indigenous peoples had no resistance, tragically spreading diseases that killed many. But in the court of current opinion on the Great Columbus, the explorer is treated as if he had come with full knowledge of what that first contact would bring, reducing his accomplishments to mere footnotes in our day.

They same is true of most innovators throughout history. If we hold these historical figures to today's morays, and judge their actions against today's wisdom and understanding, we will reduce most, if not all, of our historical giants to erred mortals at best, and in some cases, miscreants. And that's exactly what's happening today in classrooms and newsrooms across America.

Most bold actions have negative repercussions. Today we have the means to predict, study, and measure those outcomes before we make a move, and bad things can and do still occur. In 1492, Columbus's day, just pulling up anchor was a life-or-death proposition, and leaving your safe harbor was barely more than a coin toss as to whether or not you'd reach your destination. There was no NIH group to forewarn about the medical risks of mingling with indigenous peoples; no UN to set protocols for that first meeting of nations; yet today's textbooks paint Columbus as if he were a premeditated agent of medical and social genocide.

At this pace, there may be no future generations that will study this great explorer in a positive light--as a brave visionary who sided with scientists against the narrow-minded thinking of the general populace who argued the flat-earth belief; or as the explorer who connected east and west, setting the pace for the colonization of the Americas. Can we not mourn the casualties cut down by the ignorance of the times while still honoring those who pushed the envelope of knowledge that would eventually alleviate such suffering?

It appears not in today's finger-pointing. Today, the enlightened thing . . . the politically-correct thing to do is to tear away at our heroes, our founders, our giants. Instead of embracing the good, we scrutinize for flaws. Instead of celebrating the triumphs of the past, we attempt to incriminate them for the woes of today. And when they are all gone, what will we offer in their place?

Allow me to run counter to current culture and celebrate some fascinating information about Christopher Columbus--to again see him the way we once did when we were young, when names like the Nina, the Pinta, and the Santa Maria rolled off our tongues like magic words.

*Christopher Columbus was an anglicized version of his Genoan name, Christoffa Corumbo. In Spanish, his name as Cristobal Columbo.

* He was a missionary and a visionary man, literally, who believed he had received a call from God through the Holy Spirit to bring witness of the Christ to those who had not yet heard of Him. This was the underlying motivation for his exploration--to spread the Gospel of Christ.

* His 'Libro de las profecias', was a book of apocalyptic prophecies he experienced and recorded. Many of them detailed some of the circumstances that would need to occur on the earth before the Second Coming of Christ. They included: 1) The doctrines of Christ would need to be spread throughout the world 2. A final, great battle would reclaim the Holy Land from the Muslims. 3) Christ will return to Jerusalem, 4) A great leader will rise and come to the forefront. And many others.

* The impact of his contact with the native peoples of Hispaniola was so significant that periods of historical time bear his name--the Columbian period, the pre-Columbian period. . .

* A major world capital was named after him to celebrate the 300th anniversary of his voyage to the Americas--The District of Columbia.

So happy Columbus Day! And may we pass the legacy on. . .
Posted by Laurie LC Lewis at 5:03 PM