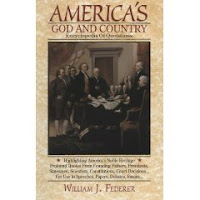 Years ago, I came across a delicious and important morsel from a letter Thomas Jefferson wrote to Reverend Jared Sparks in 1820. It shaped important aspects of "In God Is Our Trust," and in truth, it shaped much of my Free Men and Dreamers series. For years, as I would hear sides argue over whether the Founders were Christian, drawing particularly upon Jefferson's seeming distance from the Christian churches of his day, I would take comfort in this and a few other quotes, knowing that they provided intimate glimpses into his true religious sentiments.

I had always planned to include this particular quote in the final volume, but then, in the rush to complete the book, the quote flew from my mind.

This morning, I found the old notebook that held this quote while digging through the drawer where I keep my research files. Finding it now is killing me a bit, but I take comfort that Jefferson's sentiments were woven into the fabric of the Free Men and Dreamers storyline.

Let me provide a bit of historical background. Mr. Jefferson's letter to the Reverend Sparks was dated November 4, 1820. This date will seem particularly fascinating to members of The Church of Jesus Christ of Latter-day Saints, like myself, for whom the year 1820 is especially significant. It was in the spring of that year that Joseph Smith experienced the First Vision, (you can view part one and part two of movie clips relating to the First Vision,) and history will record that that singular event ushered in a new era, a restoration of concepts generally eliminated from most Christian theology. Was this what Jefferson was referring to in this letter? You read it and decide. But at the very least, the letter shows a Jefferson who embraced the pure teachings of Jesus. It's a fascinating glimpse into a visionary conversely dubbed non-Christian, or distinguished as having stood shoulder to shoulder with a generation of divinely-inspired men.

"I hold the precepts of Jesus, as delivered by Himself, to be the most pure, benevolent, and sublime which have ever been preached to man. I adhere to the principles of the first age; and consider all subsequent innovations as corruptions of His religion, having no foundation in what came from Him. The metaphysical insanities of Athanasius, of Loyola, and of Calvin, are, to my understanding, mere relapses into polytheism, differing from paganism only by being more unintelligible. The religion of Jesus is founded in the Unity of God, and this principle chiefly, gave it triumph over the rabble of heathen gods then acknowledged. Thinking men of all nations rallied readily to the doctrine of one only God, and embraced it with the pure morals which Jesus inculcated. If the freedom of religion, guaranteed to us by law in theory, can ever rise in practice under the overbearing inquisition of public opinion, truth will prevail over fanaticism, and the genuine doctrines of Jesus, so long perverted by His pseudo-priests, will again be restored to their original purity. This reformation will advance with the other improvements of the human mind, but too late for me to witness it." (1)

Also, you can click the image of "America's God and Country to buy a copy of this wonderful book. There are scores of them for under a dollar. I think every family should have a copy on their book shelf so they can discover the power in the actual words of the Founders.
Posted by Laurie LC Lewis at 9:53 AM