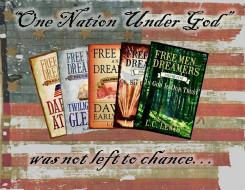 Though volume five, the last volume of Free Men and Dreamers, was released nearly six months ago, rendering it an old book in publishing terms, I still get letters and notes from readers, and they are still as thrilling as the very first.

The air is thick with patriotism every summer, and with this year's elections cycle playing out, it's even greater, and as readers look for something historical to whet those patriotic appetites, Free Men and Dreamers has been the choice of many.


When we sang the Star Spangled Banner in Church today I pictured how you had written about it in your book. Made it very real to me. Thank you.

(The complete Star-Spangled Banner story is told in book four, "Oh, Say Can You See?")

And then this note arrived today referencing the events that occurred when the British occupied and sacked Washington. They are described in volume three, "Dawn's Early Light.")

Again thank you! Today during the unveiling of Pres Bush's portrait they mentioned how Dolly Madison protected the painting of George Washington I felt good knowing the background of the comments from reading your books!

And a week ago this review was posted by the prolific Ms. Sheila Windley Staley of LDSWBR and the blog, "Why Not? Because I Said So."

So it's been a good week to soak up some sweet words about Free Men and Dreamers. If you haven't read the series, please check out the books at www.laurielclewis.com. And if you have, hold on. I should be releasing something new before Christmas.

In any case, take your family somewhere historic this summer. Trudge through a battlefield and relive how America won her liberty, or hike to an old fort. The sesquicenteenial of the Civil War is going on right now, and Bicentennial celebrations for the War of 1812 and the Star-Spangled Banner are just beginning. So step out and embrace America!