For you gluttons of punishment, another epic from the Lewis household's police files. All true, people, all true.

We're LDS, (Mormon), and every summer we invite the young, single adults (18-30) in our area to come over and have a barbecue. We've got a pool and a hot tub out back, and with five acres the singles can spread out and play softball and relax. (Surprisingly, Tom finds inexplicable reasons to be away on these days when the stereo streams the outdoor speakers with clean tunes and crooners like David Archulletta at ear-splitting decibels, but I digress . . .) 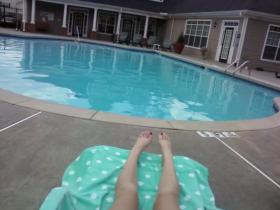 We spiff the yard and house up for our guests, and on this day, after running to the grocery for some odds and ends, I shoved my car keys in my pocket, slung my purse over my shoulder, and moseyed into the backyard to set my goods on the picnic table. On the way I saw some litter the mower had chewed up and spit out, so I picked it up and shoved it into the pocket housing my keys as I made my way.

Minutes later cars filled with tanned, sunglass-ed, bathing suit-clad water-warriors began arriving, toting beach towels, coolers, and bags of food. I greeted the first round of singles, and then, knowing that these young adults could manage their own party, I retired to the house to man the kitchen.

A few minutes later a young man knocked on my door. "Sister Lewis? The police are here."

"An officer wants to talk to you."

I hurried outside and found a tall dubious trooper eyeing the scene.

"Are you the owner?" he asked.

"You're alarm reported a break-in fifteen minutes ago."

I tried to see the scene through the officer's eyes--an alarm going off at a house where a party is about to commence. He surveyed the young guests and their coolers which I assumed he presumed were filled with alcohol. I reached in my pocket and pull out my paper-littered set of keys which contain an alarm fob. "I was picking up some trash and shoving it in my pocket. I must have hit the alarm button by mistake. I'm so sorry."

I raced back inside to produce my purse and my license and then back out before the kids started getting frisked. When I arrived I noticed a marked change in the officer's demeanor. He was smiling, and chatting with the young people. No bikinis, no speedos on the men. One opened a cooler filled with nothing more nefarious than root beer. The grocery bags produced chips and veggies, and a Tupperware container revealed a few dozen homemade cookies. While the pulse of the music was loud the tunes were innocent and cheerful.

I handed him the ID and he gave it a cursory glance.

"These kids (they hate being called that but at my age anyone under 35 is in kid-range), are from my church."

His smile broadened. "I kinda figured that out after a while."

One of the young men offered him a soda. A girl offered him a cookie. He declined both but stood amidst the scene, studying the group of returned missionaries, future missionaries, and clean cut twenty-somethings. For a moment I sensed that he wished he could stay and soak up the sweet innocence permeating the group. It's likely a far cry from what he would encounter as the day progressed.

"Nice place," he said, and then, as if needing to add something policeman-like, he adds, "Just be aware of that button the next time you shove your keys in your pocket."

"I will. And thank you again. I'm really sorry for dragging you out here."

As he left I felt sad for him leaving this moment of peace to return to the real world. The young people seemed to sense it too. I wondered in that moment if they realized how wonderfully peculiar they must have appeared to that officer. How blessed they were that this was their normal.

If pride is a sin, I was guilty of it that day, for them, and for the good trooper who paused to soak up that sweetness for a moment.

And yes, this will be a chapter someday, in some very special book.