Book Nook Review: "THE SONG OF MY FATHER," by Christine T. Hall 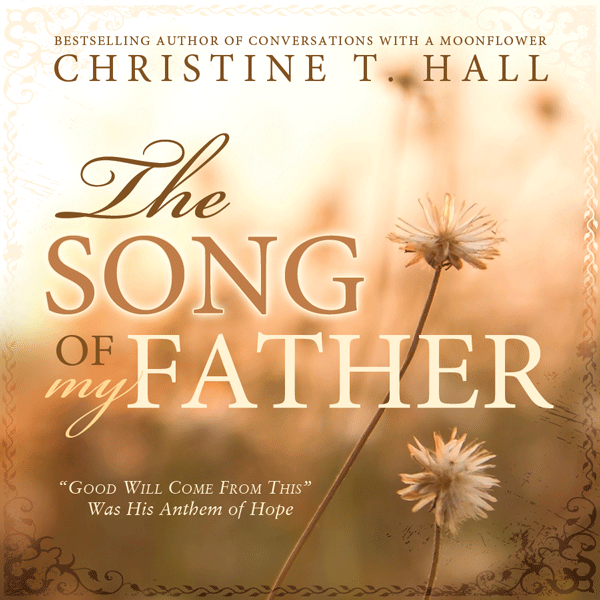 Christine T. Hall’s first book, Conversations With a Moonflower, reminded me to slow down, and cherish time with people.  When I saw her new book mentioned on social media, I was anxious to get my hands on a copy and explore more of her insightful essays on life.

Hall’s new release, The Song of My Father, opens with her farewell to her greatest teacher—her father Frank. She arrives on his hospital floor during a code blue call to his room—a call from which he never regains consciousness. Denied the opportunity to speak with him, she sits by his bedside, holding his hand, and speaks to him, recounting aloud moments his example and faith-filled lessons, his song, served as her anchor.

The book is comprised of eighteen tender essays divided thematically into three parts. Within each part there are several chapters. In “Music Lessons,” Hall shares glimpses into how her father’s example, in situations as varied as his treatment of a homeless soldier suffering with PTSD, to his patience over a flat tire. These events supported and mirrored his sage verbal counsel, note for note, becoming the melody of his life’s song. Hall notes how his words, delivered in beautiful simplicity, were often re-edited takes on famous quotes, attributed to the wrong individuals. The whimsy of the delivery did not detract from the quality of the counsel, which, as The Song of My Father illustrates, proved true as Hall grew. Her father’s underlying philosophy of life, that no matter what happens, “good will come of this,” eventually became Hall’s expectation as well.

Part Two, “Learning to Sing” opens with the horrific event that plunged Hall into despair, causing her to question how good could ever come from such an experience.  This section chronicles the experiences that pull her from the abyss by reminding her of her father’s song, setting her back on the path of hope. These poignant essays are written in Hall’s unique voice, elevating each piece from a sweet story to a moving personal experience for the reader.

In the final section, “The Song of Believing,” Hall reminds us that we all need a song of hope. In her own words: “Each of us, at some time in our lives, will experience loss, heartache, and a grief that seems to test us to our limits. If we choose to live and walk by faith . . . we eventually come to a place of acceptance and finally, after much work, to a place of believing.”

It is that tone, that honesty, that makes The Song of My Father so powerful for readers. Admittedly, Hall shares some incredible, deeply personal experiences, facing them with unvarnished candor and straightforwardness. There is no Pollyanna-ism here, nor self-pity, or aggrandizement. Hall squarely leaves you with the understanding that each of us will face hard things, and times when we will need to draw upon an inner strength gleaned over a lifetime. Hall’s resolve was strengthened by the words and example of her father. She challenges readers to identify and build their own song of faith.

What overwhelmingly shines through each essay is the power of parents’ influence, and how deeply the resulting impressions are imprinted upon a child. Hall’s message is that good can be learned, even from imperfect parents.

This book will likely prompt readers to consider their own parents’ influences in their lives, and it should cause parents to consider the “song” they are leaving for their children.

The Song of My Father is worthy of placing on any family’s bookshelf. It would make a treasured, thought-provoking gift for a parent or older child, but there is broader value in this timely book. Each essay would serve as an excellent vehicle for family discussions on a variety of topics, from hope to service, from forgiveness to patience and sacrifice.

Christine T. Hall's The Song of My Father is published by Cedar Fort, and is available in a hardback gift-sized book, or as an ebook. Get the hardback version. You’re going to want to sit and read this one many times.

Email ThisBlogThis!Share to TwitterShare to FacebookShare to Pinterest
Labels: books, Christine T. Hall, LDS authors, The Song of My Father