WE ARE ALZAUTHORS: The Inspiration Behind "Dragons." 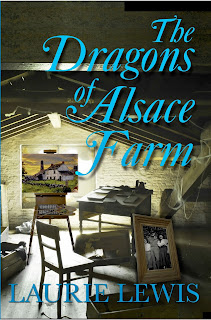 I was honored when Marianne Sciucco, (author of the newly released "Swim Season,") invited me to guest post on the "We Are Alzauthors" blog. Marianne, and several other authors impacted by dementia/Alzheimers, began this blog "to provide resources for those living with dementia, and their caregivers." Collectively, this group offers decades of experience in living joyfully in spite of this disease. Here's the article, but please visit the site and check out my friends' books. Their stories will remind you that you are not alone.
****************************************************
THE STORY BEHIND "DRAGONS"
Like our family, my proposed WWII mystery, “The Dragons of Alsace Farm,” was also changed by our mother’s diagnosis of dementia.
After my father’s passing, Mom threw herself into her farm and animals, finding purpose in the care of her “babies” and the maintenance of her land. Progress on the book slowed when our previously happy, healthy mother began exhibiting signs of what we assumed was depression, needing more of our time and care. Her mood swings were erratic and her reality seemed very skewed. She was often sick, and we suspected that her hygiene and cooking skills were slipping, causing recurring stomach distress.
Over and over, we took her to her internist, pulling the physician aside to express our concerns that something was amiss. Each time, Mom charmed her, redirecting all questions about her health and routine to another topic with the skill of a railroad switch operator. We were always assured that she was great, and dismissed without getting any solid help. But the changes increased, and a neurologist finally concluded that Mom had dementia. Fear became her new reality. Fear, frustration, and guilt became ours.
After interviews with caregivers, loved ones, and health care providers, we realized we weren’t alone. Although most people are impacted by dementia in some way, I was aware of only a few books tackling the topic. I decided to ramp up the tension in my book by placing my WWII survivor, Agnes, on the dementia spectrum, allowing me to offer readers a glimpse into the impact of the disease on individuals and entire families.
Soon after Mom’s diagnosis, we found a young couple with mild disabilities who wanted more independence. They moved into Mom’s home for a time, offering farm help and companionship in exchange for rent. Mom believed she was helping them, and they felt they were helping her. As a result, the three of them rose above their limitations to lift and serve one another.
Inspired by these observations, I spoke with counselors at the local Department of Aging to see if we could pair people who have a home but need help, with people who could help but need a home.
Legal barriers killed the idea, but I decided to introduce this dynamic into the book. I turned to two friends/family therapists to help me accurately create Noah and Tayte—characters with alternative challenges who would similarly impact Agnes. My mystery had now morphed into a family drama about internal dragons—the fears and secrets we all battle.
It’s been very gratifying to see how people are reacting to the book. Many say it hits close to home. Readers love the characters, especially Agnes, who reminds them of some loved one who has been similarly affected by dementia. They also mention the hopeful, redemptive message in “The Dragons of Alsace Farm.”


On a personal note, writing “Dragons” was cathartic and healing. Writing Agnes’s scenes helped me step away from my concerns and see things from Mom’s perspective. Like Tayte, I finally stopped trying to “restore” her, and learned to appreciate her for whom, and where, she is. Like Noah, I recognize that she still remembers what matters most—love.

Available on Amazon:
Posted by Laurie LC Lewis at 1:39 PM

Email ThisBlogThis!Share to TwitterShare to FacebookShare to Pinterest
Labels: Alzauthors, dementia, The Dragons of Alsace Farm