The Highwayman of Cordovia,
by
Linda Weaver Clarke, 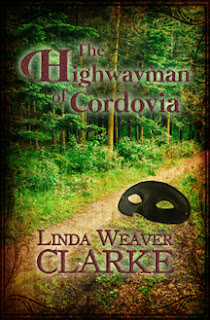 The Highwayman of Cordovia is the second volume in Linda Weaver Clarke's series, “The Rebels.”  While some of the characters from the first volume do appear in the second, each book is a standalone read, so readers can jump into the story with either book.

Christine Griffiths, a pastor’s daughter, is also a member of a rebel effort to prevent their recently liberated country from being taken over by a power-grabber who wants to be king. Interestingly enough, her journey home from a visit to the leader of the rebellion is disrupted by a highwayman seeking an artifact that will give the new king the legitimacy he needs to rule Cordovia.

The rogue’s attack on Christine’s carriage angers her, as she sees his attack as one more indication of the country’s decline. But what she doesn’t realize is that she and the highwayman are seeking the same goal—to keep their country free—though they are using different tactics.

Christine doesn’t realize that the dreaded highwayman she loathes is actually Austin Knight, the young man on whom her affections have long been aimed. It sets up a nice conflict that ads depth and fun to the ongoing political drama that plays out.

The Highwayman of Cordovia is a sweet, clean romance with fresh takes on familiar themes. There are plenty of twists and turns to hold your interest, while the overall read is a simple pleasure that will provide a delightful escape into a world of dashing heroes and brave heroines.

The Highwayman of Cordovia is a sweet escape youi can feel good about passing on to a  youth or friend. It's available on Amazon.
Posted by Laurie LC Lewis at 10:14 PM