What are we leaving behind? 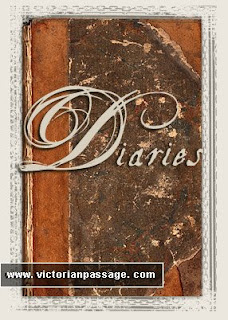 One of the most entertaining and intriguing parts of the research on this
series has been reading the personal diaries and letters of men and women who lived two hundred years ago, in the era of the War of 1812. Clearly, some of the entries were as poignant to them as they are to us—a young boy’s account of seeing a conquered American army being marched through the spectator-filled streets of Montreal, or Sarah Ridg Schuyler’s descriptive account of being ushered into the magnificent but unfinished Capitol to attend President Madison’s Inaugural. These glimpses into another time, even another world, are priceless shards of history that help personalize the people and events of this lost era.
They touch us on a personal note as well. While the account of a young woman’s appraisal of a rival seems like a universally timeless topic, her gentle word choices and the grace with which she applauds the other woman’s virtues also provides a stinging measurement of how different our eras are. There is something in the word choices and the sentence flow that simultaneously fascinates me and makes me melancholy. Beautiful expressions like, “extraordinarily entertaining” and “pleasant diversion” would likely now be reduced to “really fun”, while “her face was exquisite, as perfect as porcelain” might be expressed as “really pretty” or worse yet, “she’s hot”. Where is the beauty of our language today? Where has our vocabulary gone?
I’m guilty of it too. It drives me crazy that the descriptive words that flow through my head when I write get replaced with their anemic sidekicks when I speak. I started noticing it when my children were in their teens so I began employing a strategy to take our language up a notch. Whenever anyone would use a word that impressed me I would point it out and say, “Good SAT word!” Sometimes they’d be flattered by my notice of their brilliance and sometimes they would just roll their eyes and give me that “Oh please” look, but when I tried it with the students at the high school, they seemed to like the recognition and actually started applauding impressive word choices made by their peers.

Another tactic I began utilizing at school was aimed at reducing the amount of swearing I heard in the halls. I made posters of a saying President Kimball used to say. It went something like, “Profanity is the attempt of a feeble mind to express itself forcibly.” I plastered them in my work areas and made little cards with the saying on it. When a student would swear within my ear space I’d scold them humorously and make them read the card, then I’d tell them if I caught them swearing again they’d owe me a quarter. Sure enough, I collected a lot of quarters which I then invested in treats to reward my “reformed”, but the most interesting thing began to happen. Kids would drag their “vocabulary-challenged” friends over to me to have me “give them the treatment too”. Somehow being reminded that coarse language was not acceptable actually pleased them and there was a remarkable drop in swearing in my areas. They just needed to have the expectation raised.

Another concern the old diaries have raised in me is the effect of our increasingly paperless world. When our letters and cards are being transmitted electronically and texting replaces writing, few permanent records of our interpersonal communications are being kept at all. In two hundred years will there be many “hard copies” of personal writings for our descendents to read, for them to know what moved us, what filled our days and what dreams we dreamed? Will they even be able to feel the imprint of our culture on our language?

I’m the most craft-handicapped person that ever lived, (a glue gun is a lethal weapon in my hands and my handwriting is so poor I was encouraged as early as sixth grade to take up typing), so I bravely admit that I am not a scrap booker. But let me with equal courage express my longing to be one . . . to leave a beautiful record behind. I do my best. I journal on my computer, (yes, an electronic device, but it can be printed out). I’m no Wilford Woodruff. I have gaps, and when life is really hard I avoid delving into those topics until the rawness has soothed somewhat, but the rest is there . . . the dreams, the triumphs, the disappointments.

Like Sarah Schuyler, someday I hope my children and my grandchildren will read my journal and know me . . . really know me, not as just the wrinkled old woman I will be by then, but as the proud young mother of babies, and as the exultant mother of a new parent. I don’t want tender letters to my missionary sons to dissolve in the press of “delete” nor letters written to lift a crushed heart to evaporate when the computer memory has been exceeded. I hope my family will understand my opinions about the government and the entertainment of my day. Better yet, I hope they will sense what I did to make a difference in the world. I want them to hear my voice in my entries . . . to know I was, as we all are, a complicated and diverse person—silly one minute, then somber at times . I want them to feel how deeply love touched and shaped my life and how my testimony of Jesus Christ’s and Heavenly Father’s love sustained me so fully that I could often feel the blissful joy of heaven right here.

I want to leave all those things behind in hard copy . . . for them to understand, and for me to remember.
Posted by Laurie LC Lewis at 9:23 PM

Email ThisBlogThis!Share to TwitterShare to FacebookShare to Pinterest
Labels: Patriotism