THE GULF OIL SPILL: IT'S PERSONAL 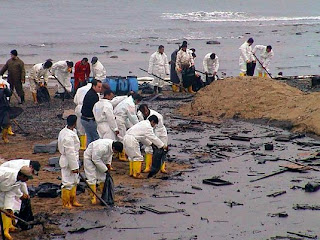 I turned on CNN this morning as I generally do each day, and the Gulf oil spill was the number one topic. Dr. Sanjay Gupta was in Chalmette, Louisiana conducting an interview with two fishermen's wives who are training to be peer counselors to help families deal with the devastation caused by surviving two catastrophic events--not in a lifetime, not in a decade, but within five years.

My ears perked up when I heard the name "Chalmette, Louisianna." Chalmette sits in a bowl below the mighty Mississippi, the hardest hit area after Katrina. Tom and I visited Chalmette a year aftger Katrina while I was conducting research for Free Men and Dreamers, and we were dumbfounded by what we saw. It was a leveled mudland and the few buildings that still stood were marked with X's to indicate the toll the flood had taken in lives. This devastated wasteland was the site of the famed Battle of New Orleans, and despite the damage, or perhaps because of it, the Park Service was open and ready for business. Why do I say they were perhaps open because of the damage? Let me share a portion of my interview with one of the rangers from an article I wrote four years ago:

Finding Chalmette was no easy feat. Our attention was riveted by the complete devastation all around us--abandoned shells of homes with large X's marking the dreaded casualty numbers, broken roads, uprooted trees and mountains of debris just bulldozed into piles by the side of the road for want of any other place to put it. The rangers were on guard at their stations in a portable trailer that sat in the bowl of the plantation site because their former facility had been washed away by the mighty Mississippi that literally flowed some two feet away and twenty feet above their heads, subdued once again by earthen walls and levees.

I asked the ranger if they had many visitors these days and she nodded thoughtfully. "How are the children handling all this?" I asked her. "I assume some of them lost their homes and maybe some family members too." She shrugged and became resolute. "I sit them down right there," she said, pointing to the carpet, "and I tell them about Ole Hickory, (Andrew Jackson). I tell them all that he suffered--that he was taken prisoner by the British when he was 13, during the Revolution. He was starved, beaten, slashed by a sword and that his entire family died as a result of the war leaving him alone and an orphan by the time he was 14. But he never gave up. I tell them look at what he went on to accomplish. And then I tell them that they're made of the same stuff as Ole Hickory, and even though they've been through some hard times, they're not to give up."

I was awed by that civil servant and I knew she was probably changing lives, redirecting darkened hearts to a new, brighter path, imbuing hope back in. I imagined Primary teachers saying something similar about Brigham Young and the pioneers to rows of wide-eyed LDS children, or teachers using George Washington to inspire a new generation of patriots. Oh, I hope so. I hope so.


I hope they still have the strength to fight on that way, but the devastated residents along the Gulf are afraid to breathe the air, afraid to drink the water, fearful of eating the seafood that was the staple of their diet and the source of their livelihoods for generations. They mourn what appears to be the loss of their way of life and homeland, and they ache for the wildlife and beauty decaying before their eyes.

The spill is now bigger in square mileage than Maryland and West Virginia combined, and steadily growing. It’s already affecting parts of the Florida panhandle and threatening Florida’s gulf Coast.

I fell in love with Anna Maria Island some years ago. While struggling with some medical issues, its beauty and peace became my healing place. I set “Awakening Avery” there, highlighting some other wondrous nearby locations I came to love like Sarasota Bay, the magnificent Ringling mansion, the Ca D’Zan and Bradenton Beach. Look at this pristine paradise. They’re all on alert now, and in danger.
The Gulfstream is expected to carry the spill around the tip of Florida and up the coast. And then, if the Atlantic currents pick it up, it will blacken the eastern seaboard venturing off into the Atlantic Ocean itself.

If this isn’t personal to you yet, it better soon be.
Posted by Laurie LC Lewis at 9:15 AM