I was approached about helping spread the word about a fundraising campaign to benefit a Utah Boy who has severe aplastic anemia. This is one of those times when blogging can exceed entertainment. I hope some of you can attend a few of these events, or make a donation. Thank you in advance for your consideration and support!

WHAT: “Distance for Davis” Fundraiser for 14-year- 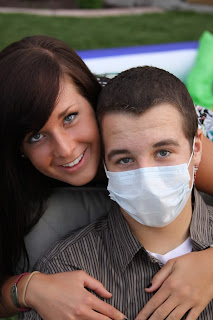 Affecting only three in one million Americans each year, aplastic anemia is a disease of the bone marrow, where the marrow stops making enough red blood cells, white blood cells and platelets for the body. People like Davis, with severe or very severe aplastic anemia, are at risk for life-threatening infections or bleeding. Treatment includes bone marrow or cord blood transplant and immunosuppressive therapy.

To learn more about Davis Cox and the “Distance for Davis” events and fundraiser, log on to http://www.daviscoxfundraiser.com/.
Posted by Laurie LC Lewis at 3:15 AM