THE ADAM AND EVE PRINCIPLE 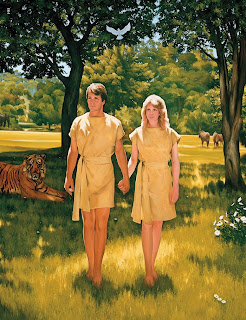 I recently led a workshop on dating and marriage for a Youth Conference, and early in my presentation one female attendee quipped loudly, "Is that all we're supposed to do? Get married and make babies? That's stupid."

The acrid tone of her voice took me back at first. To her, marriage appears to ber a ball and chain, but sadly, she's not the only young person who no longer looks at marriage and family as the ultimate expression of joy. Even in the traditional, family-based LDS community, singles are marrying later, in smaller numbers, and the number of children being born to LDS families is dropping. The doctrine of the family is under serious assault, and no one appears to be immune.

Sister Julie Beck detailed some alarming studies on the subject in a landmark talk given to CES Employees last fall. The real question is, why is marriage losing its appeal, and how do we stop the erosion of the institution?

For me, it goes back to the Adam and Eve principle. Let me explain. In the seventies, a research institute set out to conduct a cultural study. A list of scored questions was devised and researchers scoured the earth to survey every possible cultural group from Manhattan-ites to villagers in islands and in the Rain Forest. They assumed that upon extrapolating the data, they would be able to rate groups based on their level of cultural advancement. It didn't turn out that way.

Instead of breaking down group by group, the results broke into only two major groups . . . male and female. No matter where they went or to whom they spoke, the men's answers generally broke similarly, and so did the women's. The men's trends? They hit the extremes of the scales--they strongly agreed or disagreed; yes/no; black/white; good/bad; right wrong. The women generally fell into the middle ground, expressing a moderate point of view--their responses were more gray, neither black nor white, expressing "maybe, sometimes, I need more information."

The researchers were dumbfounded by the results, but they really shouldn't have been.

Let's look at the first man and woman. When tempted to break God's command that they not partake of the fruit of the Tree of Knowledge, look how they responded. Adam flatly said "no," which is in keeping with the findings of the researchers. But Eve gave the idea some thought. Genesis records this:

"And when the woman saw that the tree was good for food, and that it was pleasant to the eyes, and a tree to be desired to make one wise, she took of the fruit thereof, and did eat." She mulled it over, gave it thought, gathered and considered all the information, weighed the consequences. Again, her response mirrors modern data.

Men and women are different by divine design. It is no accident. Men see the world through a prism of justice, while women see it through a prism of mercy. Those Kennedy researchers determined that if men ruled the world without the tempering mercy of women, they would fail to compromise and would destroy one another. They also concluded that if women ruled the world without the men's capacity for justice, they would find it difficult to make the "hard choices" society requires and they would fail as well.

It is the combination of both genders' strength that makes us whole. We are the Yin and the Yang of one another so-to-speak. Together, we can become better than we are alone. A good marriage will not limit your dreams or stifle your growth, it will give you a partner to help you realize those dreams.

Some people will never have the opportunity to discover these joys for themselves, at least not in this life. And some have seen enough sorrow from bad marriages to cut a wide path around this commitment. It doesn't change the truth of the equation. Went entered into wisely and with faith, marriage stands the test of time. Adam and Eve got it right.
Posted by Laurie LC Lewis at 8:26 AM