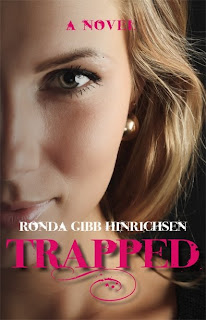 "Trapped," the second novel by Ronda Gibb Hinrichsen, is an ambitious suspense/romance/paranormal novel debuting under Walnut Springs Press' banner. From the back cover:

A forged letter, a golden vial, an ancient curse... Her expression remained somber, but excitement crept into her voice. You are the Firstborn She...You must go to them. You want me to act as bait? Not bait, Emi. A spy. Our Trojan horse.

When Emi Warrin wakes one night to find a thief in her mother's house, she has no idea the intruder has planted a trap - a mysterious letter that will change her life forever. Lured to the Austrian Alps with Daniel, the man she loves, Emi is thrown into a perilous, mafia-like world of feuding families and a devastating curse that spans generations. As the Firstborn She - the only firstborn female in hundreds of years - only Emi can free her family from the curse that will soon afflict her as well. But for Emi to break the curse, she must delve into evil designs.

As Emi struggles to understand her destiny as the Firstborn She, she learns that everything isn't as it seems and that all choices have consequences. Can Emi break the curse before it's too late?

Hinrichsen's opening pages prove she is an author with admirable skills. From paragraph one the reader is invested in a bizarre crime scene storyline with a well-placed plot that keeps you turning pages. This section was so well-written I would have been satisfied to follow this thread for the rest of the book. But the novel changes pace as Emi's love interest, Daniel, enters the picture, and we move to the Austrian Alps to search for Emi's father.

The quirky conversational asides between Emi and Daniel interrupted the pace of the book, diluting the tension and reducing the grit of the story. Still, paranormal enthusiasts have some unique elements to sink their teeth into with "Trapped," and suspense lovers will enjoy navigating the plot twists and the unexpected ending.

I think Ms. Hinrichsen is a new talent whose books we will want to follow.
Posted by Laurie LC Lewis at 7:59 PM