A 72-HOUR MIRACLE FOR THE VICTIMS OF SANDY

It might be said that local help sent to Nassau County, New York residents—some of the hardest hit victims of Hurricane Sandy—came as the result of one couple being in the right place at the right time, and prepared for “such a time as this.” 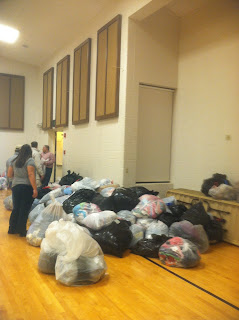 President Kevin Calderwood and his wife Sydnee are residents of Reston, Virginia currently serving a three-year mission for the Church of Jesus Christ of Latter-day Saints in the New York, New York South Mission, which covers this devastated area which includes such hard hit villages as Lynbrook, Rockaway, Broad Channel, and Freeport. President Calderwood is the president of that mission, supervising two hundred missionaries from various parts of the world who rode out the hurricane. As soon as it was safe to venture out, President Calderwood and the president of another mission of three hundred missionaries mobilized their young men and women into work teams to relieve suffering and assist in the clean-up efforts.


Flooding left buildings dark and cold, a dangerous set of circumstances made more so by plunging temps and reports of another storm heading for the coast. Seeing the level of need, and the difficulty agencies were having addressing those needs, gave President Calderwood an idea. Fifteen years earlier, when he served as the ecclesiastical leader for the Church’s Oakton Virginia Stake, a district of nine congregations, President Calderwood and his wife supported a Church-based program called Gifts of the Heart, which collected donations of clothing, household goods, toys, etc, which were made available to others in need. The program continues to be a giant success in Oakton under the leadership of a new stake President, Scott Wheatley, who is also a close friend of the Calderwoods. 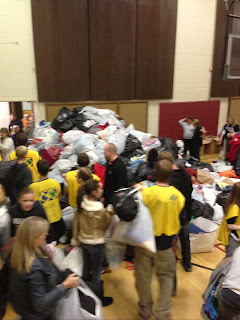 On the evening of Friday, November 2, President Calderwood contacted President Wheatley describing the critical needs in Nassau County, and the concerns he had for the army of five hundred missionaries who were dispersed and displaced in dangerous circumstances as they served the people of the Rockaway Penninsula.


President Wheatley immediately called for an emergency run of Oakton Stake’s Gifts of the Heart program, then he contacted the presidents of surrounding stakes including Washington, DC; Annapolis, MD;  Baltimore, MD; McLean, VA; Mount Vernon, VA;  Frederick, MD;  Ashburn, VA; and Annandale, VA; inviting them to organize their own drives to collect warm clothes, shoes, coats, and other critical items, including $25 gift cards to buy food for the missionaries. What happened next was nearly miraculous.


Through emails, and announcements from LDS pulpits, the invitation was passed to congregants who in turn passed the word to neighbors. The response greatly exceeded all expectations as families in each of these areas filled bags, and eventually filled church buildings with goods to be loaded Monday night and shipped to New York by Tuesday. When the size of donations was reported, President Wheatley knew they would need more trucks than the two contracted to carry the goods to New York. When Paxton Van Lines owner Kevin Paxton heard about the need, he offered trucks, drivers, and boxes to assist in the relief effort. Five trucks were needed Monday night, and more trucks are being sent over the following days to other locations as more donations pour in. 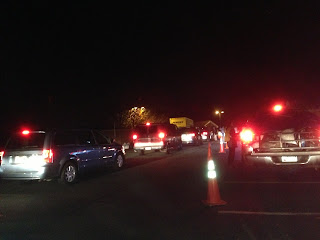 The Frederick Stake—which consists of eight wards or congregations across Frederick County, and parts of Carroll, Howard, and Montgomery Counties—received hundreds of bags of clothing and raised over $9000 in donations. A few dozen workers sorted and packed two pick-up trucks and a medium trailer, all of which were filled to capacity when they left for Oakton Monday night. The men who drove the loads were astonished to see cars and trucks in lines that spanned blocks as they waited their turn to deliver goods. Another semi-truck will ship the remainder of Frederick’s donations in a few days.


Laurie Turner, Assistant Public Affairs Director for D.C. Metropolitan Area of The Church of Jesus Christ of Latter-day Saints estimated that between four and five hundred volunteers were on hand in Oakton to receive, sort, pack, and load the combined donations. It was also reported that over $50,000 dollars was collected that night, and more money and donations were collected the following week.


A high school student volunteering at the Frederick chapel on 199 North Place was astonished by the constant arrival of donations. Said she, “It’s like the miracle of the loaves and the fishes.”
Posted by Laurie LC Lewis at 9:52 AM