It's a sobering truth to admit that most of what we know about our parents will be drawn from personal experience. History won't consider most of our folks important enough to warrant extensive research for books or films, so what we see will really be what we get. And yes. That's sad. 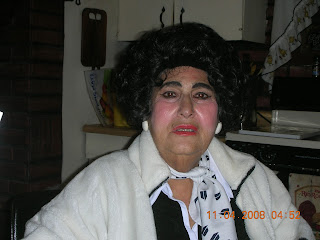 By and large, it means we will remember our parents as we see them, as adults headed towards middle-age and beyond. We will know them, not for their hopes, but for their realities. Not through the folly of youthful day-dreams, but in the acceptance of their choices, and steeped in the dutiful fulfillment of their responsibilities.

Except for the senior high school portrait of my mother, every image of her records her as a mother, surrounded by at least a child or two, dressed in the budget-conscious attire of a woman stretching a tight income across ever-increasing needs.

Mom had the senior photo taken, but she never walked across the stage and earned a diploma. A few weeks after that photo was taken she talked her mother into taking her and a friend to Fun Land in San Francisco. A cocky nineteen-year-old soldier, far from his home in Maryland, stood by the entrance that boasted a grate rigged to blow ladies' skirts up, Marilyn Monroe-style. Mom and her friend crawled through a fence to avoid the wind gust, and the soldier spent the rest of the day following her around until she gave him her address. Six weeks later, she married that soldier. Her mother ignored the threat an irresponsible rush to the altar could pose because life at home held an even greater threat from an alcoholic step-father with a history of physical abuse.

All we knew of Mom's childhood were stories of that abuse, and the regret that she never finished high school. Her abhorrence over having her photo taken was legendary. As a woman of Portuguese ancestry, she blended in in her home state of California, but her dark eyes, black hair, and olive skin caused her to stand out in Dad's more Euro-centric state of Maryland.

Mom had a talent for drawing, which never had a chance to develop except as evidenced by the little drawings she sketched on everything from TV guides, to paper bags. She also expressed a love of reading and writing, and recounted how her teachers told her she was a smart girl who could be anything she chose to be. Those old stories went in and out of self-absorbed, young ears attuned to current concerns.  Even as children, we could see the irony of her choices, that she escaped an abusive father by marrying an occasionally heavy-handed husband.

Mom worked hard at home, turning dime store goods into a Christmas wonderland complete with baked goods by the dozens. She made a penny go as a far as a dime, and she drew great pride from the fact that despite the lack of a diploma, she was able to contribute to the family budget by driving a school bus.

As I grew up, Mom attributed all my scholastic accomplishments to my father, an electrical engineer, who escaped an abusive home of his own, and who successfully used the military as a stepping stone from a life of agricultural poverty. We bought the story. Mom couldn't do the "new math" our homework required, and Dad travelled a great deal of the time, so those who could figure the material out on their own survived, and those who couldn't, struggled.

It crushes me now to admit I accepted that image of Mom as a simple, uneducated woman. If I had had my eyes open, really open, I would have seen her bright intellect reflected in her choices and accomplishments.

She earned her GED in her fifties to encourage grandsons lacking scholastic interest. She wasn't a library regular. To my knowledge, she never had a library card, but she always accepted offers of free books, and she always seemed to have a stack of Readers Digest Condensed Novels on her nightstand.

Sometime in the sixties Mom came across a box of old historical books. I recall her her pride over this find--a series of diaries written during the Civil War, and a bio of an old pioneer and trapper--but my teen-aged mind was too preoccupied with boys and the latest edition of Teen Beat to be concerned about the details.

Years passed, Dad mellowed, he and Mom became devoted sweethearts, then he passed away leaving Mom depressed and alone.  After many difficult years helping Mom maintain her independence we received a diagnosis of early stage dementia, and we moved Mom off the farm. While cleaning out decades of collected memorabilia, we came across treasures squirreled away in corners long forgotten.

We found boxes of photos Mom was handed after her own mother's passing, photos of her as as chubby-cheeked child, and as a dressed-to-the-nines teen in home-sewn fashions that rivaled catalog vogue. In some, her eyes were bright and filled with playful anticipation. Family shots showed her as a timid, awkward young woman. I began to know my mother anew.

My father believed in slides and their semi-annual projected showing, but we found a few dozen rare, secret candid photos from our childhood that featured a beautiful, svelte Portuguese-American woman surrounded by children. Her eyes spoke volumes. She was a study in contrasts. Shy, confident. Soaking up happy moments like parched ground in some photos. Grim-lipped and stoic in others. We remembered those days. Our own maturation revealed more of Mom.

We also found the antique books, which have provided some of the most remarkable insights into who our mother really was, and probably still is, deep inside.

The diaries are difficult to read. The penmanship is flowery, as is the vernacular of the eighteen sixties. As a historical researcher and writer, I struggle with it, working hard to translate a few sentences. My mother read every page, even taking the time to insert slips of paper with her own notations within the pages. Her notes have been invaluable to me.

The old bio of the pioneer is likewise a challenging read. It features hundred of characters, many Shawnee or Iroquois, with the difficult spellings of those languages. It features the unfamiliar names of places changed by treaties and statehood, and yet, she read every page, many times I'd venture to say. Again, she inserted her own notes, written in her lovely hand, along the margins.

I begin to picture her, lying on her bed in the evening after we were all asleep with her books opened and her pen and slips of notebook paper beside her. On nights when Dad was traveling, having adventures in far away lands, Mom was having her own adventures. She was taking advantage of the opportunities available to her to learn.

The author in me is incredibly aware of the importance  of these discoveries, that Mom's treasured books were historical. She is likely the unrecognized root from which my love of history and the written word grows. Mom didn't write short stories or novels. She wrote about her life, her testimony, her walk with God. We found notebook after notebook filled with her grateful recounting of miracles wrought in response to prayer, and of those provided in a moment of urgency. Long notes were tucked into cards and letters to friends and children and never mailed. We have them all now.

We are finally discovering Mother, who she actually was in her heart, and what dreams she drew upon as she raised us. She left a silent, secret key to her heart in these letters and notes, cards and slips of paper. They are sacred now. I'm scanning them for the family.

She can't know that she's still teaching me, providing unspoken encouragement to do better in my personal writings, to commit more of my effort to the legacy I'm leaving for my family. I don't want the majority of that legacy to be scraped off Facebook pages and blog entries. Except stories like this one.

Thanks, Mom. Yes, you're still teaching. I guess you always will.
Posted by Laurie LC Lewis at 9:41 AM