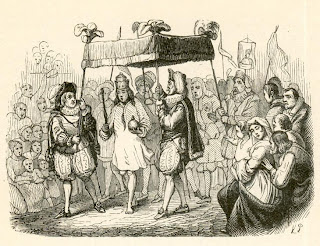 It's hard to deny the brilliance of the fairytale writers and their clever wordsmithing. Much like parables, great thought provoking truths are subtly disguised in story format, leaving the listener to ponder the intended message long after the tale is told.

One of my favorites is The Emperor's New Clothes, the tale of the prideful clothes-horse of a king who contracts with some tailors for the sewing of a fine suit of clothes. Playing on the King's arrogance, the swindling tailors convince the emperor that they are sewing an ensemble made of fabric so exquisite it cannot be seen by those too inferior to appreciate and recognize its value. The tailors bet that the pride of the king, his court, and his constituency, will prevent all of them from admitting that the only finery the emperor is wearing is his own sorry birthday suit.

And the tailors' ruse would have proven successful had a small child, untouched by the pressure to conform, not hollered out the truth that, though unuttered, was always obvious to all.

That pressure to conform, and the consequent tide of silent tongues, is not limited to fairytales. Ask the average Joe on the street what he thinks about the hot bed topics of our day and most likely his opinions are fairly traditional. If that's the case, why don't the polls on differing networks reflect this?

Has our fear of being labelled "unenlightened" or "unprogessive", caused us to keep our opposing points of view to ourselves, confessing them only in secret or anonymously? Or worse yet, have the "enlightened" and their glitterati spokepersons marketed their point of view so seductively that we too are beginning to see the fine tailoring of an invisible suit?

When did this happen?

Naked is naked no matter the political or intellectual spin. But right is right, and eternal princples like marriage retain their meaning only if we seemingly small voices holler collectively and call the world's bluff.
Posted by Laurie LC Lewis at 3:21 PM

Email ThisBlogThis!Share to TwitterShare to FacebookShare to Pinterest
Labels: Book Review, Common Sense or the lack of, Middle-age, Patriotism, preparedness