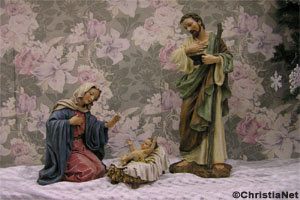 ONCE IS NEVER ENOUGH


John laid the Bible carefully on the end table and ruffled his young son’s head. He smiled as Ann bent low to place their toddler daughter near enough to receive a good night kiss. “How about we say prayers with Mommy and Sarah tonight, Jacob?” John suggested as he tenderly showed Jacob how to fold his arms. With eyes misting and his heart stirred by the too frequently neglected expression, the man found it hard to begin, finding his voice more easily as his son snuggled closer.

After the amen was uttered, Ann rose and guided the children to bed, leaving John to marvel at the simple turn of events that had precipitated the change in their family that night. He scanned the table where the critical shopping lists now lay, tossed inconsequentially upon the return home, their errands left incomplete. Odd, since just a few hours earlier he and his wife had sat there with their carefully balanced checkbook, newspaper ads and their list spread between them, strategically making the decisions about whom and what to shop for.

They had divided the errands between them— his wife and Sarah setting off in one direction while he and Jacob headed in another, beneath dangling snowflakes the size of garbage can lids, past inflatable snow people and their revolving, musical village. Twice, his rambunctious five year-old had dashed off to explore the colorful display, each time earning a stern rebuke from his father. His father’s reproach only unsettled the child further until the man finally relented, allowing his son a few moments to survey the dazzling display that showcased the gems of the season—the must-have toys which were set upon blocks of rotating, plastic “ice”, beneath which the names of stores and price tags were displayed.

With hands clenching his carefully-crafted list of errands, he stared at the scene, taking in the sounds of three dozen children, each one pointing out desired items while voicing their requests aloud. Soon he heard his own son’s voice joining in the cacophony, crying out request after request for each and every item on display, and for a moment . . . for just a regrettable moment, as the crowds jostled him and the music and voices raised all around, he voiced his thoughts. “I hate Christmas. . .”

The bitterness of the words chilled his heart as soon as they passed his lips. Hungry to find Ann, to have her reset his anchor, he lifted Jacob into his arms and whispered, “Let’s hurry and find Mommy.”

Clutching his son close, he dashed off to the first store on his wife’s list. As he approached the location he saw a crowd gathered around the store’s window and he marveled at the attitudes of the people coming away from the area, speaking in soft tones, their faces as bright and soft as their smiles. Curious, he drew near and to his amazement, little Sarah was the cause of all the excitement.

On tiny toddler knees with her nose pressed to the glass, she knelt before a Nativity scene, babbling as she pointed from one character to another. “Beebee!” she cried out with excitement. “Nicey beebee!”

“Yes,” her mother whispered hoarsely. “He is a very nicy baby, Sarah. He’s a very special baby too. His name is Jesus.”

With a trembling finger, Ann pointed to Mary. “And this is his mommy. Her name is Mary. She didn’t have a nice crib or a soft blankie for her baby, so she had to wrap him with pieces of cloth and lay him in this soft hay. The animals kept him warm and,” she pointed out various figurines, “angels sang to him . . . and shepherds and Wise Men came to visit him.”

Sarah slid her finger along the glass until it too pointed to Mary. “Pretty mommy. . . pretty beebee.”

John stooped down, gently placing Jacob beside Sarah and sliding an arm around his wife’s shoulder. Other children were now drawing close to the scene. Gazing at them, Ann wiped a tear from her eye and smiled as she explained the moment to John. “I was standing in line at the kiosk over there, struggling with Sarah who was crying and squirming. I was at my wits end when she suddenly became still and quiet. When I checked to see why, I noticed that she was staring at this store window whispering, ‘Beebee . . . beebee. . .’ After I paid the vendor, I put her down and she ran right over here. This is what she’s been doing ever since. It’s like she gets it, you know?” she sniffed. “It’s as if this little child understands what’s most important about Christmas.”

“I know this story, don’t I, Daddy?” asked Jacob with a furrowed brow. “Didn’t you tell it to me once?”

Sliding his list into his pocket, John squeezed his wife’s hand and raised her to her feet. Each bent down and picked up one of their children, placing kisses on their cheeks. “Once is not enough for the telling of the Christmas story, Jacob. Let’s go home and read it again, tonight, because once is never enough.”