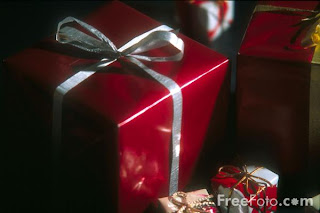 Continuing on with a story a day, here's number four, written to honor my Mom.

When the Williams family moved in across the street from Sylvia Rodrigues, they could hardly know the impact the dear older woman would have on them. Over the next six years, cups of sugar, recipes, advice and hot bread passed from Sylvia to them, and in return, Mrs. Williams and the children regularly exchanged favors and kindnesses. However, aside from smiles and waves, and knocks on the door at for Trick-or Treat, few words had passed between Sylvia and Rick Williams, though he watched with increasing curiosity as seasons and holidays passed, bringing cars to and from Sylvia’s house, most of them loaded with exuberant relatives who exploded out of the vehicles, only to be scooped into the woman’s loving, expectant arms and herded into her fully festooned house.

One late November evening, after a particularly long day at work, Rick returned home to find his wife hanging up the phone.

“Honey? It’s Sylvia. Her TV’s on the fritz. Could you stop by and take a look at it?”

After two minutes of shoulder shrugging and excuse-making, Rick trudged off to Sylvia’s with a ham sandwich in tow. When she came to the door he thought she looked much older and more tired than he remembered her being, but her smile still beamed as she thanked him for coming and welcomed him in. They walked past a half decorated Christmas tree and he was more than a little surprised to see that other Christmas regalia was already in place. She showed him the broken TV set and as he set about to repair it, Sylvia left the room and returned with another box from which she pulled longs strands of tin foil chains. “What are those, Sylvia?”

“These old chains?” she chuckled. “Funny how much cooking foil plays into my Christmas celebration.”

Rick leaned quietly back against the wall giving Sylvia the cue to explain further.

“You see, when we were drawn into WWII, Americans were saving every scrap of metal for the war effort, so there was no foil for cooking. Instead, we slathered butter on the inside of paper bags and stuffed our turkey in to roast. I know they make special cooking bags these days, but somehow, every time I get my new paper bag from the grocer, I am reminded of the patriotism we felt when we sacrificed our foil for the war.”

“And the chains? I take it you made these after the war, when using foil came back into vogue,” he teased sweetly.

“Oh yes,” she blushed. “My father died when we were young, and my mother had to work long hours in a factory to support us. There was little money or time for Christmas decorations, so each day after school I spent dozens of hours wrapping strips of foil into links to form these shiny chains to make the house lovely for Christmas. It was my gift of love to my mother and brothers. Every year now, I question whether or not to hang them up. They’re nearly sixty years old . . . but as ragged as they are, they remind me that Christmas isn’t about money and presents. It’s about love.”

Rick rubbed his arms as a chill made the hair rise. “I know it’s supposed to be, Sylvia, but it’s all become so commercialized. The real meaning of Christmas just gets lost in all the advertising and hoopla. Every year, my wife thinks she needs to pull off some perfect Currier and Ives Christmas with the house all trimmed in Victorian splendor and a roasted goose with all the trimmings on the table. Of course, it never turns out the way she hopes, and she ends up feeling disappointed.”

Sylvia sighed and nodded as she hoisted a faded Father Christmas figurine to the top of her credenza. While fluffing his beard, she said, “I suppose I’m as guilty as they come. One good whiff of evergreen and cinnamon and my skin prickles with excitement.” She opened the Nativity box and withdrew the precious figures. “I love setting up the Nativity each year. As simple as it may sound, the Christmas story becomes so personal to me when I hold these figurines in my hands. My children, and now my grandchildren use them to act out the Christmas story while my son reads from Luke.” She chuckled softly and rubbed her arms as if the same chill had run through her. “I‘ve trimmed my lists way back but I still love sending cards to people and singing carols. I adore sharing treats with the neighbors and all the chaos that goes with it. I especially love whipping up the old foods from my childhood and reminding my family of where and whom they came from.” She pulled a jar of yellow, beans marked “Lupini Beans” from the cupboard. “The Portuguese consider these good luck beans.” She held the jar close and her expression became wistful as old recollections crossed her memory. “I remember how exciting it was when my grandmother presented the dish of beans and had us each take a handful. We’d squeeze them until they’d slip from their skin and into our mouths. As soon as we’d taste the salty flavor, we’d make a wish for the New Year.” Again she chuckled. “It was just a silly tradition I guess, but what fond memories I have of those dear departed faces as we joined in that happy little game. My children roll their eyes at me now when I bring out the dish, but I still hope they’ll pass this sliver of heritage onto their children.”

She sighed as she placed the jar back on the shelf. “I guess what I’m saying is, for a few weeks of the year, I just set aside my own troubles and let the magic of the season carry them away. I can’t do everything I once did, so I choose to do those things that bring joy. You see, I don’t believe the trappings of Christmas are bad, in and of themselves. Rather, I think it’s really about how we use them to add to the joy of the season.”

Rick leaned back against the wall and marveled at her enthusiasm. “And what about all the stress of selecting and buying gifts?” he exclaimed dramatically. “Don’t tell me you love all that too?”

Sylvia smiled a melancholy smile. “I tuck a little something under the tree for each of my loved ones, but all the rest of it . . .” she said as she waived her hands, displaying her preparations, “it’s all just the lovely wrapping for the only real gift I give.”

Sylvia turned and headed for the kitchen leaving Rick wondering what that ‘real gift’ actually was. The question lingered with him the rest of that day and into the following year – up to the week before the following Christmas, when he heard that Sylvia had passed away.

One by one, cars arrived from the funeral – but this time the people did not bound out of their vehicles, because Sylvia’s love filled arms would not be waiting to gather them close as they had always done. But then, something marvelous happened. The moist eyes of the sad people, who filed into Sylvia’s house, brightened into cheerfulness as soon as they crossed the home’s festive threshold. Confused children soon ran about the yard amongst a host of cousins with whom they had loved and laughed with since birth. Rick saw the lights twinkle through the windows long after the street had gone dark and he heard carols drifting from the house to each neighbor’s ear as the family regrouped and kept their matriarch’s memory alive.

Hours later, there were hugs and kisses as the last of the family reluctantly exited the house. A parcel was tucked in their arms and their once heavy hearts had had their burdens lifted, replaced with the real gift Sylvia had left them.

Her son moved into her old house and when Christmas rolled around again, Rick stopped by to drop off a plate of cookies. When the door opened, he caught a glimpse of Sylvia’s Nativity set on the mantel and noticed her old silver chains hanging from the kitchen ceiling, hovering over a jar of lupini beans, sitting on the counter, and his eyes teared. A few days later, the rest of her family gathered to celebrate Christmas together. Rick heard the carols drift from their house and saw grandchildren dressed as shepherds and angels passing by the picture window.

Again, he heard her words, “I tuck a little something under the tree for each of my loved ones, but all the rest is just the lovely wrapping for the only real gift I give.” He understood completely.
Posted by Laurie LC Lewis at 6:01 PM