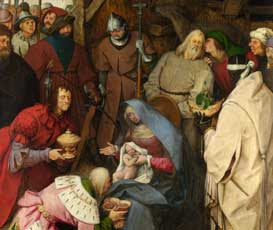 (Bruegel's "The Adoration of the King"

The woodworker started his day like every other day. He stopped by his son’s house to walk his adored eight year-old grandson to school, and after dropping him, off he headed on to his little Main Street work shop. There in the shop, by the large bay window, stood a homemade table covered by a recently completed jigsaw puzzle. He loved puzzles. In fact, a day never passed where the table wasn’t covered with a puzzle in some stage of completion. He worked on them throughout the day, a minute here, a minute there, whenever he took a break from his labors. Sometimes he would pop a piece into place as he passed by, but generally he would set aside a block of time in the lull of his work to sit at the table while he stared at the intricately cut pieces, trying to visualize each part’s place. His favorite puzzles were the kind he could only buy at the hobby store, those whose pieces recreated the works of the great masters: Da Vinci, Matisse, Rembrandt, Rubens, and today he needed a new project to begin.

It was the third of December and the hobby store shelves had been thoroughly picked over by the holiday early birds. The only puzzle remaining had been opened and re-packaged without a photo of the completed image. It was the reason no one else had bothered with the toy, but the man found the dilemma intriguing and carried it to the shop to give it his best effort. After hours of work he still had no idea what the finished project would disclose but he continued to move the pieces around the old oak table. There were shapes colored in hues of scarlet and a few blues but the bulk were in tones of beige and brown, none of which were descriptive enough to give the man a ready clue as to what great work his completed project would imitate. He smiled. The difficulty of the work didn’t dissuade him. He knew that time and patience would reveal the image’s secret.

He was mulling over some blue pieces which he had snapped together. There were too few to build a sky but he could not yet place them in their proper context. He looked out the window to get a new perspective, and noticed some of the townsfolk dragging out the Christmas lights to begin decorating Main Street. He saw people on ladders hanging wreaths and others stringing lights and ornaments on the tree in the Town Square in anticipation of the evening’s annual tree lighting ceremony. The woodworker smiled and when he returned his attention to the puzzle he was immediately able to snap the three blue pieces precisely into their place.

Encouraged by his success and the lack of customers, he tackled the puzzle with renewed enthusiasm until Bruegel’s, The Adoration of the Kings, began to emerge. He continued to place pieces, soon revealing the stall and the donkey, some soldiers, a host of onlookers and of course, the three kings. The blue pieces had formed the veil of Mary who held the Christ Child in her lap, but after placing every piece he had, he sadly realized his puzzle was missing one crucial piece.

His grandson, returning from school, opened the door and called out a melancholy greeting to his grandfather who was on hands and knees on the floor. “Why so glum?” the woodworker asked.

“I want to help decorate the tree, but they will only allow me to hang one ornament.”

“And you want to do more?” smiled the woodworker who was still searching for the lost piece.

“Yes,” mourned the child. “I am eight now. I want to do something that will really help.”

The grandfather slowly rose to his feet and slumped into his chair. He patted his knee, calling for his grandson, and once the boy had scrambled up the man pointed to his puzzle.

“See. Despite all the work I have put into this puzzle it is marred because of the loss of one piece. One small piece,” he repeated sadly. “The story is incomplete because without that piece we cannot reveal the face of the Christ Child. We cannot tell if He was smiling or sleeping, how He responded to the loving touch of His gentle mother or the adoration of the strange kings. The story is obscured because one piece has not contributed its share to the story.”

The boy raised his large brown eyes and stared into his grandfather’s wise, crinkled ones. The man hugged the small child close and kissed his head. “It matters not what job we do, only that we each contribute what is required of us.” He tapped piece after piece of the puzzle. “When the work begins, who knows which contribution will be the one to reveal the face of the Christ?”

The boy scrambled off his grandfather’s lap and peered into a crack in the old, wooden floor. After withdrawing an object from the crevice, he returned to his grandfather’s side and opened his palm, revealing a single puzzle piece. He snapped it into place and there, lying on the table before him, was the smiling face of the Christ Child in his mother’s protective arms, surrounded by the three kings. He gingerly touched the holy face, then he began rubbing his hand over the completed picture, feeling the ridges that marked the boundaries of one piece’s contribution from another’s. He suddenly realized the importance of each part, then, smiling lovingly into his grandfather’s face, he hurried out the door, ready now, to simply do his part.
Posted by Laurie LC Lewis at 10:33 PM