A DAY WITH TOMMY 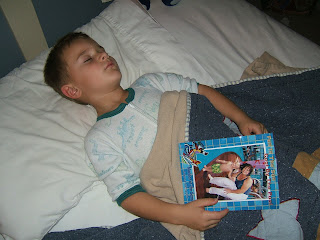 We had planned to have the entire family gather here this weekend for the blessing of Amanda and Nick's baby, Brady, but sickness kept our daughter-in-law, Krista, home in Utah with two sick babies. Sadness. . . So, our oldest grandson, Tommy IV, arrived yesterday with his daddy and uncle in tow, and we are now left to shower all our pent-up affections and attentions on one tiny, annoyed infant, and one very happy, over-entertained five-year-old.

Right out of the gate we leaped into a rousing game of Mickey Mouse Yahtzee which I had purchased a few hours earlier, desiring to have a game that would "challenge" my gifted grandson. After one round, he was bored. I anticipated this eventuality when, after rolling three Mickeys and two Daisies, he said, "That's a Full House!" "You know what a Full House is?" I asked. "Yes, Grandma. I play real Yahtzee at home with my mom." Needless to say, we put the Mickeys and the Daisies in the box and moved on.

We hooked up my birthday present, a Wii Fit game. We're not even going to go there. . . (That picture of Tommy holding a photo of Grandma in a bathing suit says plenty.)

Later, Tommy and Grandma went into the play room and pulled out a memory game. We played one round the real way, turning over pieces and matching them to our cards. When Grandma appeared to be winning, Tommy proposed a change in rules whereby he was guaranteed to be the victor. I chuckled over that because Tommy tends to change the rules frequently depending on the anticipated outcome. (In truth, if he felt I would be saddened by a loss, he would give me all his points plus a good, long hug.)

After that round ended, Tommy created a new game. It involved the memory cards and Matchbox cars and played somewhat like checkers. I didn't understand the purpose of the game or any of the rules, but it was designed specifically with that intention.

I think he's being groomed for a seat in Congress.

I'm supposed to be working to meet my goal of writing my next book in ninety days, but this is way more fun. I'll have to write twice as many words next week. But today, it appears I'm taking my turn prepping a future Senator.
Posted by Laurie LC Lewis at 9:14 AM