AUTHOR INTERVIEW: D.N. GILES: "The Sharp Edge of the Knife" 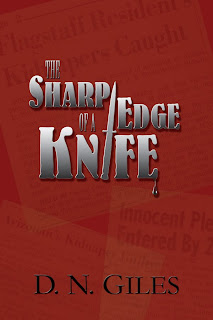 An author's intimacy to a subject or story adds an extra dimension to a novel. That passion can drive your research and writing, but does it blur your objectivity or muddle your ability to balance emotion and fact? Sometimes you just don't know until you get into it.

But most of us will find fascinating stories that beg to be told buried in our family history. "Counting the Cost" by Liz Adair, a finalist in the 2010 Whitney competition, is a perfect example of a rich, tender story based on a thread of history she found buried in the family history treasury.

D.N. (Nichole) Giles has a new release, "The Sharp Edge of the Knife," which is based on the perilous kidnapping of her grandfather, Mel Petersen, on February 11, 1958. Giles offered some insights into her experience writing a biographical novel that hits so close to her heart.

The premise behind this story is fascinating. How did you find out about it?

NG: The main character is my grandpa. I remember hearing during my childhood that he’d been kidnapped in the past. Actually, he was kidnapped or held hostage three times total in his life, which makes the story all that much more interesting to me.

You're lucky you're even here! I can see why this would fascinate you. What finally made you decide to write about it and get it published?

NG: After my grandpa died, I was reading his life history and this particular incident really stood out to me. I decided to write it as an article at first, but there was so much information, and so much research involved when it came to finding the facts, that it turned into a book.
Turning a biographical piece into a novel almost always requires the author to make some plausible leaps to fill in the gaps. How much of this story is biographical and how much is fiction?

NG: I'd say about seventy percent biographical. In my earlier drafts I tried to keep it as accurate as possible, but then discovered that if I did that I'd have almost no dialogue. And when three different publishers told me it was too short with just Mel's point of view, I added in one for Jeneal. Some of that is from things she told me from memory, but I fictionalized the majority of the scenes with the kids because it's been fifty years since all this, and there was no way for her to remember it all.

Did the fact that you were writing about your grandfather make this project easier or more complex?

NG: A little bit of both. Because it is a family story, there's more pressure to make it accurate to not only what happened, but also to the nature of the main character. That's harder to do than I ever expected. Also, though, it was difficult to track down the information and try to stay one step away from the details, because this is someone I love. But in that same way, I had far more determination to find the facts, which is probably what kept me going every time I hit a dead end. It was a long haul, but I actually tracked down one of the kidnappers and talked to him on the phone. Very interesting conversation, and so worth the work it took.

What does this project mean to you personally?

NG: I'm going to tell you a secret. I didn't intend to write this book. When my grandpa died, my grandma printed his life history and had copies made and bound for each of the grand kids for Christmas. I've read that thing front to back about 20 times through. The story of this incident takes up about two and a half pages of his recorded life history. My intention in the beginning was to write it as an article, since at the time I was submitting a lot of articles to magazines. I thought this one might make it into the Ensign. But when I started researching, I realized that this story was much more complex than I'd thought, and knew it had to be more. I didn't want to write a book about it, but the story wouldn't leave me alone. I told my grandma that my grandpa, Melvin Petersen, kept prompting me to do it. So she helped me, and I followed through, however reluctantly. At this point, nothing I've ever worked on has been more spiritually enlightening, or important to me as an author.Plus it makes me miss my grandpa more.

I bet it does. I'm sure you grew so much closer to him as you conducted your research? How did that go?

NG: I started out with a handful of newspaper articles and about two pages worth of journal accounts from my grandpa, and somewhere in the mix there was a court subpoena. From there I called the police departments involved, but because the case was so old—fifty years—they referred me to the national archives in Denver. From there, I was able to get someone to help me track down the case and all the evidence and court documents. Interestingly, the knife used in the kidnapping, as well of some of the other evidence, is still there, and will remain there forever. Or at least, that’s what I’m told.

Amazing. How long did it take you to actually write this book?

NG: It was actually a fairly long process all things considered. From beginning to end, it took me almost three years to get from the inception of the idea to publication. And there was a lot that happened in between, including me working on two other major projects at the same time. All in all, though, I’m thrilled with how it turned out.

Is this your first published novel?

NG: It is my first published novel, but not my first published book. I'm a co-author of the book Mormon Mishaps and Mischief, which is an anthology of short, humorous anecdotes about Latter Day Saints. That book was released this past December. I worked on both projects at the same time, which is why they're being released so close together. And for those who are wondering which project was more work, the answer is neither. And Both. They were equally a bunch of work, even though they required completely different skills and direction. I will say that I would never try to do an anthology by myself, though.

What advice would you give to other aspiring authors who discover interesting stories in their family history?

NG: Don't give up when you're researching and hit a dead end. There are always ways to find what you're looking for. Be warned, though, you might stumble on something that you never expected and end up with more work than you planned on. It's all worth it in the end.

You mentioned that you were also working on two other major projects? What are you currently working on?

NG: Generally, I'm not an LDS fiction author. Everything else I'm working on is young adult paranormal and/or fantasy. Right now, I have one YA paranormal finished, for which I'm looking for a publisher. I also have two other books, one a sequel to the first, and another a completely different story, about halfway through the rough draft stage. I'd like to finish both this year.

Where can we learn more about The Sharp Edge of a Knife?

NG: You can read the first chapter at my website http://www.blogger.com/www.sharpedgeof%20aknife.blogspot.com. My author bio is also there, with a few interesting facts pertaining to the story.

And how can readers pick up a copy of "The Sharp Edge of a Knife?"

NG: Right now it’s definitely available on Amazon, and I’m told it will be in stores sometime in the next few weeks, if not already. My official book launch promotion is scheduled for March 27th from 1-3:oo pm at Eborn books in the Provo Towne Center mall in Provo Utah. It’s open to the public, and going to be lots of fun.

Thanks, D.N. Giles for previewing your new release, "The Sharp Edge of a Knife." Good luck with your book launch!

Thanks so much, Laurie. This has been fun and thought provoking.
Posted by Laurie LC Lewis at 3:21 PM