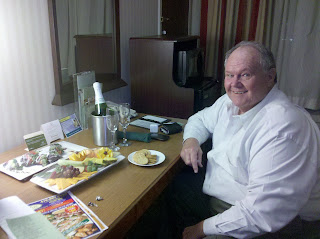 I'm supposedly the writer in the family, but the prize for creativity may be more deserved by my husband for his artful dinner dodges.

Now I'm a fairly good cook. Ask my kids, who think Mom's meatloaf, chicken enchiladas, taco soup and lasagna are "da bomb." So why is it that my husband exercises his greatest creative skills to dodge supper?
I began noticing it back in the mid-eighties when his long commute from the traffic-locked DC suburbs pushed his evening arrival time back further and further. I'd receive a call right around the time the office closed. "Hi Sweetheart! I'm leaving now. What's for dinner tonight?" I'd reply with some economy-friendly entree like, "Corn Bread Pizza," or "Tuna Casserole," to which his reply was either, "Sounds good," or with increasing regularity was, "Uh. . . . wow . . . you know . . . I'm really not that hungry. I ate a late lunch. Why don't you just go ahead and feed the kids and I'll just pick up a little something on the way home?"
In the beginning, I took no offense. But as the fast food wrappers started piling up in the back seat, I started noting which menus brought him home, and which did not. So I adjusted.
Then we reached the nineties--the era of the expense account. The calls were primarily coming from out of town. "Hi Sweetheart. (yada yada yada) then the killer comment. "So what did you guys have for dinner?" I'd reply with some kid-friendly menu like chicken fingers or pigs -in-a-blanket, which I had also partaken of, the menus saved for the occasions when Dad was absent. "Oh, nice. . ." he'd reply, followed by this. "These customers took us all to dinner, and I had the biggest steak you've ever seen. It was falling off the plate!" Swell. . .
But when he was home, I noticed an definite increase in client-related suppers on the nights I was dishing up leftovers.
Fast forward to 2000 and beyond. . . our last moments with high schoolers only and empty-nester period, when it was frequently just "dining for 2." I wised up, Before thawing, chopping, or sauteing anything, I'll run the menu past hubby. "I'm planning no cooking tilapia tonight. How's that hitting you?" If his palate was pleased by the suggestion, I'd cook. If not, we'd head out to one of the local eateries for take-out or eat-in.
Today? Well, he's seriously watching his diet--no "fall off the plate sirloins," no half-pounders. Instead of the days when we actually watched Milky-Way bars (purloined from the Trick-or-Treat bowl) fly from the blades of the bedroom ceiling fan where they were stashed, (No joke. This will definitely end up in a book someday!) he grabs a orange or two as a TV snack. As a friend stated, our "scintillating" menus now read something like this: broiled something, green veggie du jour, a salad, and a high glycemic carb. Wow. . . .
Oh, I try to mix it up--some cool marinade here, some mango salsa here--but you should have seen his reaction to the Bulgar wheat salad I brought home the other day!
So an hour ago, I asked him if he'd like some breakfast. (An Eggbeaters sandwich on those 100 calories high fiber rolls?) His response? "Uh . . . I think I'm feeling like McDonald's today. Can I pick something up for you?" Dodge,! Weave! Score an Egg McMuffin! Old habits die hard.
A few weeks ago we took a few days and ran away from life. And he did order up some culinary fun--a cheese and cracker plate and chocolate-covered strawberries. Moments like these are definitely worth forgiving a dodged tuna casserole or two.
Posted by Laurie LC Lewis at 9:34 PM