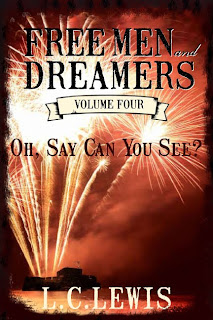 OH SAY CAN YOU SEE,
book four of my
Free Men and Dreamers series,
now has a cover
and a pre-order link!

Free Men and Dreamers captures the events that changed fifteen loosely-tied states into "one nation under God."

Writing historical fiction is a dicey enterprise where an author balances the tasks of writing a gripping novel within a framework of meticulously-researched history. The history of this 1814 time period and its larger-than-life people is already compelling, but the viewpoint our rich, fictional characters add to the storyline makes Free Men and Dreamers a poignant, entertaining read.

Since this volume thrusts our characters into the pivotal Battle of Baltimore and the events surrounding the writing of the "Star Spangled Banner," we tried to capture the emotion of that "perilous night" with "bombs bursting in air" on the cover. I hope the image will leave readers hungry to tear into the story.

"This book touched me deeply, causing me to reflect on the countless lives that have sacrificed freedom and happiness so that I could pursue my own. Lewis has written a compelling, almost epic, novel, full of themes that span from 1812 to 2010—and beyond. As her characters wrestle with the dislocation and trauma of a war, they come to realize what it means to be Americans, what it means to be free—and ultimately, what it means to be human."

Research for the book took me on a visit to Fort McHenry where I spent time with the expert on the Battle of Baltimore--Scott Sheads--who not only heads the staff at the fort, but who serves as the curator of the "Star Spangled Banner" exhibit at the Smithsonian. Like most historians with whom I've had the pleasure of chatting, Sheads is generous with his research and observations, offering me tidbits of little-known information about the perilous battle upon which the hopes of a battered nation hinged, and about Francis Scott Key who observed it as a detainee in the harbor, including details about the days surrounding the writing of the poem that became our nation's anthem.

Once started I had to read the whole thing through and many parts brought tears to my eyes. (Ernie, a reader)

But it's the glimpses of the characters, drawn from historical accounts, that drive the story, experiencing the agonies and triumphs of families who lived through these times. Begin at the beginning if you're new to the series:

Volume 1, DARK SKY at DAWN, introduces the complex story of our six lead families--three American, two British, one slave--and the devastating prelude to the war.

Volume 2, TWILIGHT'S LAST GLEAMING, carries readers into the harrowing events at Hampton, Virginia, and illustrates the toll the war takes on civilians--women and children. But through it all, a new tenacity begins to strengthen the young nation's spine as Americans rally to the cause of their nation. (Available at a huge promotional discount.)

Volume 3, DAWN'S EARLY LIGHT, throws our characters into the attack on Washington and the events that proved the mettle of the Constitution and the Presidency.

“Oh, Say Can You See,” crackles with tension and suspense. Although I know how the Battle of 1812 ended, I found myself staying up late at night and turning pages in an urgent attempt to find out what happened to the country and to the characters I came to know and love.

OH, SAY CAN YOU SEE is set for an October release but autographed copies can be pre-ordered here. We're beginning pre-release promotional activities, beginning with spreading the word about the book trailer for the series. Click on this link, go to Youtube and view the trailer, then leave a comment beneath the video to be entered to win a copy of "OH SAY CAN YOU SEE" or any other book in the series. Post the trailer to your Facebook page or blog, or post a link on your Twitter account, and you'll win another entry for each. Just leave a comment below telling me where you posted. A winner will be drawn October 9th. By then our release date will be firm and the big contest will commence.

I hope you'll join us for the blog tour, my appearance on the Candace Salima Show with a date TBA, and a host of promotional, history-rich activities aimed to raise our national pride before the bicentennial in 2012.

Thanks for the support!