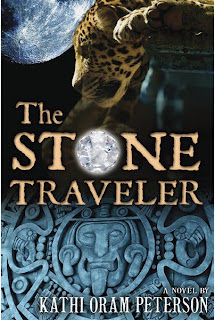 I'll be reviewing Kathis Oram Peterson's newest release, "The Stone Traveler" later this month, but Kathi is conducting a great contest in conjunction with her blog tour, and I wanted my readers to have a chance to get in on these wonderful prizes.

From the back of Kathi's book:

Sixteen-year-old Tag can’t believe he’s in this much trouble. He’s not actually a member of the gang known as the Primes — all he did was spray paint some graffiti that caught their attention. In all honesty, ever since his dad and brother left, Tag just wants to be alone. And it’s certainly not his fault that the Primes nearly beat up his goofy cousin, Ethan. But his mom is furious about these gang-related activities and insists that Tag spend the whole summer at his grandpa’s lakeside cabin, which is not Tag’s idea of a good time. So he does what any self-respecting teenager would do: run away. But he doesn’t get far before he encounters three strange men carrying an even stranger object — a stone that glows with radiant light as bright as a thousand sparklers. Tag doesn’t steal the stone — not exactly. He feels like he is supposed to take it. But he doesn’t expect the stone to transport him through space and time to a place he’s never seen before — a place that looks an awful lot like the ancient lands described in the Book of Mormon. And he definitely doesn’t expect to join Sabirah, the entrancing daughter of Samuel the Lamanite, on a quest t
o rescue her father and brother from the evil King Jacob. And he absolutely doesn’t expect to be captured by Jacob’s minions and prepared as a sacrifice to the evil idol of the city. But just as Tag faces his death, a terrible storm begins to break, and the ground cracks into jagged pieces. And he’s not sure which event will impact his life more: his captor’s knife coming at his body, the violent tempest sweeping the land . . . or the men who later appear, glowing even more brightly than the traveler’s stone.
*****************

The rules of the tour are all listed on Kathi's site. Prizes are being given weekly and the grand prize is a KINDLE!

Check it out, and check back in on the 28th for my review of "The Stone Traveler.
Posted by Laurie LC Lewis at 10:16 PM