"The best way to spread Christmas cheer is singing loud for all to hear." -Buddy the Elf 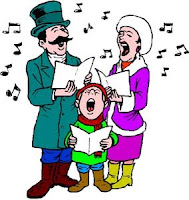 I love to sing, and Christmas is the season I most want to belt out a cheery carol, or render a tender tune about the Infant King. I like to crank up a cherished holiday CD while I bake or wrap gifts, and I love those melodies lingering in the air like a sweet musical scent of cinnamon.

I missed the opportunity to sing carols during the preceding weeks. I did play my Josh Groban Christmas CD a few times, and I tuned my radio station to Christmas music a few times, but in truth, I filled the days with Christmas labor--shopping, cleaning, readying the house for the exciting arrival of the family--and with book business surrounding the launch of "Oh, Say Can You See?" And now that it's time for baking and crooning, for caroling and Christmas hymns, I have laryngitis.

Some little malady is plaguing our congregation this year, leaving half of us stricken and voiceless. I so want to sing to my grand babies, and do a duet with Bing or Frank or Perry. Last night, I attended a John Tesh Christmas concert at the historic Maryland Theater in Hagerstown, and it killed me that during the group sing-a-long, I could only mouth the words.

This same dilemma happened to me some years ago, when my youngest son was an infant. I couldn't sing for months--couldn't even sing a lullaby to my baby--and for someone who once considered recording professionally, that was tragic blow. Christmastime was rolling near that year, and my voice returned with a five note range that settled down in the deepest part of my register. I prayed and asked the Lord to give me just enough of my voice back so I could sing to my babies, and I promised that in return, I would take my gravelly voice and sing tenor or anything I could reach. And that's what I did. Months later, the voice returned, as strong and clear as it had ever been.

Since then, I've screamed at thousands of youth basketball games and battled my sinuses' unrelenting efforts to control my entire head, and the voice has changed, but I still want to sing those sweet songs of Christmas praise. So I'm going voiceless for a few days, hoping resting the old chords will restore some voice before the season is past. Cross your fingers for me, and belt out a tune of Christmas cheer in my stead.

Merry Christmas.
Posted by Laurie LC Lewis at 8:03 AM