A FEW MORE OF MY FAVORITE CHRISTMAS THINGS-- FOOD MEMORIES 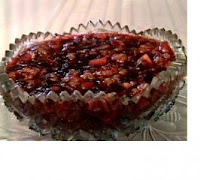 More Food Traditions
The longer I write, the more I realize how deeply I dip from my past to create family dynamics in my books. We were a rather dysfunctional little group--near stereotypes of the dominant father, submissive mother, and the assorted children who knew their place--as if we had all been called up from Central Casting. And even though we brushed the poverty line most years, Christmas really was the best time of the year at our house.

My parents' Christmas Club account assured us that treats denied us the rest of the year suddenly appeared during these magical days. Of course there was that sea of assorted pies, but there were also trays of cookies, three varieties of fudge, bowls of nuts and brightly-colored hard candies. Simple things taken for granted today were extreme joys during my childhood. We felt we had secured the grand prize of the day if we were able to con Mom out of a few of the treasured Hershey Kisses she used in her Peanut Butter Blossoms!

As you can guess, there was very little meandering from the traditional Christmas dinner during my childhood. Dad expected his favorite dishes to appear, and my mother had those recipes down to utter perfection--turkey, ham, stuffing, mashed potatoes, candied yams, Brussels sprouts, broccoli, corn, and the her utterly divine fruit salad made from cut up apples, bananas, canned chunk pineapple, nuts, and whipped cream. Divine!

Because most of the items appeared only at major holidays, their importance was ingrained in my child-psyche. A can of pineapple still holds an almost reverent place in my mind because of the special recipes in which it was a pivotal ingredient. Even to this day, I have to have several cans in my pantry or I feel something's dreadfully missing. Funny, isn't it?

I feel the same way about the other ingredients of Christmas--the nuts, the chocolate chips, Jello in all its varieties. I don't use them often, but I still buy them by the sack at Costco so I'll never run out.

Tom was out of work some years ago when the children were small. We had our year's supply of food in the pantry, and several hundred bottles of fruit I had canned. It was a hard winter for Tom, but we ate well every night. And though he was only making a fraction of his former salary as he picked up constructions jobs here and there, his dignity was maintained because he was still providing for us through the preparations we had made earlier. And the children never felt a pinch. I pulled out the chocolate chips and baked cookies. I opened the pineapple and Jello and made delicious salads, and to them, life was perfectly normal.