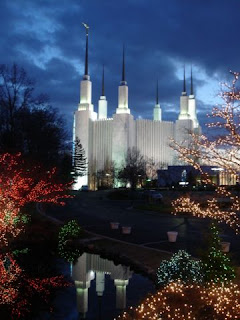 I live in the Washington D.C. temple district, and though we have not been as assaulted by protesters as LA and some other areas, we too have had felt the backlash from those who opposed the Church's support of Proposition 8. But let me share a heartwarming story that clears the muck and madness from the issue.

Rising majestically from a knoll set on a bend in the Washington Beltway, the brilliantly white, Washington DC Temple is a landmark familiar to every DC traveler. The radio stations even use it as a traffic marker, so it's no surprise it was an easy find when the protesters wanted to set up shop. Except they picked a really miserable day last Saturday.

Sometime in the midst of their demonstration, they shifted one driveway down from the Temple's lane to the Visitor Center's drive, and soon thereafter the sky darkened, the winds picked up and the rain began to fall like stinging pellets of ice water.

Now some people might have gleefully looked upon nature's timely downpour as divine intervention, figuring the protesters were getting their just desserts. But I'm humbled and awed to report that that is not how the missionaries at the Visitor Center reacted. They did what Jesus would have done. They turned the other cheek. . . and more than that, they blessed their adversaries. How? They carried umbrellas out to the protesters so they could stay dry and comfortable while they picketed.

I don't know how long the protesters remained there, protected by the gentle kindness of the very people they were attempting to demonize, but I was at the temple today, and there were no protesters present.

I offer again these words of Elder Holland. "Something is going to be asked of this dispensation that has never been asked before. [We] must be prepared to present the church of the Lamb, to the Lamb. And when that happens, we must be looking and acting like His Church."

When we respond to the images of angry, disturbing mobs shown on CNN, lets remember whose countenance we are hoping to reflect. The message is love and "no unhallowed hand can stop it". We teach and reach the world best by presenting a living example of Christ's doctrine.

Thank you, thank you to all the strong, gentle hearts who have endured abuse and hurt so honorably in places like L.A., Salt Lake, DC and elsewhere. You have been living examples of President Faust's counsel on forgiveness from his April 2007 Conference. In the face of anguish, anger must be repressed. Despite hurt, there is no room for hate. Teach? Yes. Stand for truth? Absolutely. But we must keep in looking and acting like Christ's church.
Posted by Laurie LC Lewis at 9:21 PM