The Title of LIberty is Raised Again 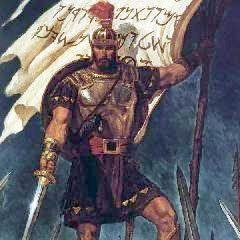 I've spent quite a bit of time lately, listening and reading wonderful talks in preparation for a women's conference at which I was recently invited to speak. I've also been thinking a lot about the election and the Prop 8 results. Some people are still angry about the election. Some are filled with hate and no longer feel America is their home. Conversely, some are angry with the Church because of Prop 8. After all this thinking and pondering, what I've concluded is that I have no place for hate or anger in my heart. Resolve? Yes. But hate? Anger? Bitterness? No. My heart has no place for these. There is simply too much work to be done to allow ourselves to be crippled by these feelings.

I think the Title of LIberty was raised again by Elder Packer in October's Conference during his talk entitled "The Test". Americans who understand Democracy also understand that sometimes the pendulum swings away from their position, but the examples Elder Packer illustrated about the Saints and their love of America, despite being denied the protection of her principles, seems prophetic now.

Is there any question that the Brethren knew about the battle to defend the family long before we did? I believe they knew this firestorm was coming way back before 1995 when they drew the line in the sand, defining marriage as a union between a man and a woman and asserting that gender matters. The Proclamation to the Family was as much an effort to align us on these principles as it was to teach the world. And in these last weeks, we discovered how critical it was to have unity among the saints on this.

Likewise, I don't think it was by accident that Elder Packer spoke about love of country and passing the test of patriotism, especially during times of adversity. The media foments what they will to drive their numbers up. But listen to the voices of the Brethren who advice us to find happiness in our circumstances, to be unified, to seek peace and to remember that God is at the helm.

Still, there is much work to be done. While Prop 8 passed this round, new battle fronts are being raised in new states. Like Captain Moroni's relentless efforts to rally and protect his people, I don't think we will ever be able to rest from this fight. The American Revolution was a young person's cause because those who began the fight knew they would be long dead and gone before the dust settled on the new republic. Likewise, this battle we fight to defend the family is also going to be our children's battle, and our grandchildren's.

But we must remember what our end goal is. In the words of Elder Holland, "Something is going to be asked of this dispensation that has never been asked before. [We] must be prepared to present the church of the Lamb, to the Lamb. And when that happens, we must be looking and acting like His Church."

As we rise to the task before us, we must look and act like members of the Church of the Lamb. We must be positive and joyful, and we must use our talents, which are many, to allow the Spirit, not force, to change hearts. I am going to work harder on this. I hope we all will.

I discovered this lovely song on youtube. Thank you, Barry Hansen, for inviting the Spirit to teach better than words alone. May we all be united in our cause, which is the cause of love.


http://www.youtube.com/watch?v=ez0vgS5UDdg
Posted by Laurie LC Lewis at 7:45 AM