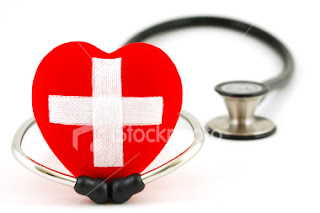 So, if you've read the comments on the previous blog you know I was wounded in action--not "war action" but in home "improvement action", which for a non-home-improvement type like me is still a battle of sorts.

I was washing wallpaper paste off a wall situated right over a heating vent whose cover was missing. I dropped my rag. (Wanna guess where it landed?) Of course. . . right down the vent. Without thinking, I reached in to retrieve the cloth so it wouldn't clog the vent, What I didn't know was that a nail was sticking out of the floor joists at a downward angle. When I tried to pull my arm out of the vent it became hooked on the nail and I was stuck in the vent.

Luckily, the elders who live here were upstairs when this happened. One ran for a flashlight so I could see what was preventing my arm from being freed while the other called Tom home from his errand. I panicked a little, fearing I'd bleed to death before I could free my arm. (Okay, so it sounds a little melodramatic now but that's what was running through my head at the time.)

Anyway, I was blessed . . . really blessed. The nail was stuck an inch deep into the side of my wrist, but had my arm been turned a few degrees more, the nail would have been directly in my wrist where all those gooshy arteries and tendons run, and I would have been in dire straits indeed.

Last week I had a breast cancer scare with an amazing resolution. Now this. So you can understand my feelings of deep gratitude to Heavenly Father right now. Yes, I'm thankful. Very, very thankful.
Posted by Laurie LC Lewis at 11:22 PM