DO YOU LOVE ROMANTIC SUSPENSE???? 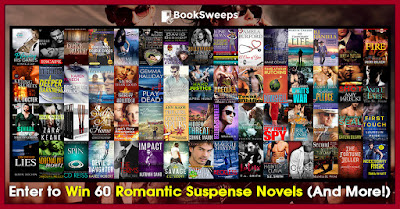 I’ve teamed up with 60 fantastic authors to give away a huge collection of Romantic Suspense novels to 2 lucky winners, PLUS a brand new eReader to the Grand Prize winner!

You can win my award-winning novel, "The Dragons of Alsace Farm," plus books from authors like Maggie Shayne and Laurelin Paige. 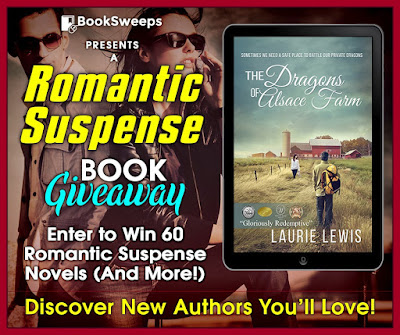 Posted by Laurie LC Lewis at 8:29 AM No comments:

I met with my friend Michelle again to interview her for the upcoming biography I'm writing about her life. She is a real survivor of the bombing of France, much like my character Agnes from "The Dragons of Alsace Farm." Today, we documented her memories of the evacuation of her French town, Braquis, as the German invasion began. The memories became a bit overwhelming as she told of the planes bombing and shooting at the lines of refugees, so we switched things up, and talked about what the children likely did on their four-day exodus from home.
She showed me that they sang as they walked, and when she broke into the French National Anthem, "La Marseillaise," I felt her patriotism and love for her native land:
Allons enfants de la Patrie
Le jour de gloire est arrivé !
Contre nous de la tyrannie
L'étendard sanglant est levé
Entendez-vous dans nos campagnes
Mugir ces féroces soldats?
Ils viennent jusque dans vos bras.
Égorger vos fils, vos compagnes!


(ENGLISH TRANSLATION)
Arise children of the fatherland
The day of glory has arrived
Against us tyranny's
Bloody standard is raised
Listen to the sound in the fields
The howling of these fearsome soldiers
They are coming into our midst
To cut the throats of your sons and consorts
To arms citizens
Form your battalions
March, march
Let impure blood
Water our furrows
I sang this song in high school French class, but the words were so terribly poignant as I imagined little children singing them as tyrants were literally attempting to cut them down.
A moment later, she then began singing this little ditty. I asked her what it meant. The tune was much happier than the lyrics, about children looking for bread and finding their pantry bare, then noting that the neighbor had bread, but it wasn't for them. Another reminder of the toll war and its deprivations had on children who saw this simply as "life."
She teared up several times during our interview, and I told her what an example she was of faith, that she held on with the hope that tomorrow would be better.
She reminds me of this quote I love by Hugh B. Brown: “Night never had the last word. The dawn is always invincible.”
Posted by Laurie LC Lewis at 6:02 PM 1 comment: