I'm gearing up for the "AWAKENING AVERY" launch on July 24th by offering a Rafflecopter giveaway! https://www.amazon.com/dp/B07F246SJT 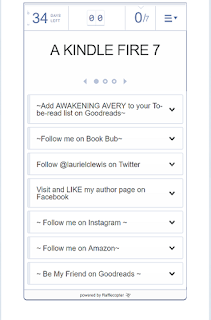 I'm offering participants 14 prizes, including an ALEX and ANI bracelet, free books, and a KINDLE FIRE 7! http://www.rafflecopter.com/rafl/display/f2bdac0f30/ …? Enter up to seven ways! The giveaway runs through August 24!

Posted by Laurie LC Lewis at 11:10 AM No comments: 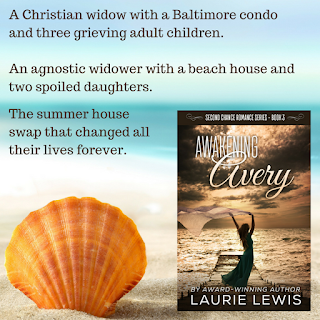 When Gabriel returned to the lobby of the building, Mrs. Thompson was nowhere in sight. One box was missing but one still remained. He told himself it had been only a few minutes since they parted, but he strolled outside anyway to look for her, anxious to settle the details and be done with the arrangements.

He scanned the parking garage with no luck, but on the way back he saw the woman huddled on the asphalt by a large, green recycling bin, rubbing her shin and crying. This time he overruled the selfish inner voice that told him not to get involved and hurried to where she was crumpled.

Avery heard his approach and lifted her head. As she saw him, she seemed to shrink farther inside herself and sob that much louder.

“I’m fine, I’m fine.” She raised a hand to symbolically push him away as she leaned across the crushed cardboard box she had carried there.

“What happened?” he asked as he knelt beside her, touching the tear in the leg of her pants and then glancing at his hand. “You’re bleeding.” 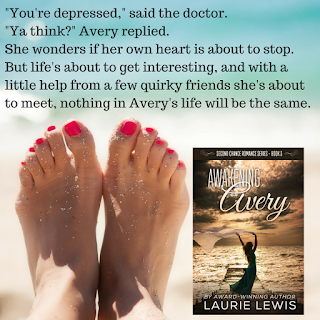 Avery Thompson drew her hand across her eyes, smearing her mascara. “I haven’t always been this way,” she said with flailing hands as she struggled to a stand and wiped her runny nose on her sleeve. “I’m a successful professional woman, an author, well respected in my genre. The truth is, Mr. Carson, my husband died recently, just a few months ago, and I’m still a little shaken by it all, you know?”

Gabriel admired her emerging pluck, and from the look on her face, her show of fortitude had surprised her as well. “I do understand, Mrs. Thompson. What can I do to help?”

Avery bit her lip and sniffed loudly before grabbing hold of the bin for support to stand. “I was trying to toss this box in, but I was too short to lift the lid. I climbed on top of the box to reach the lid, and it collapsed under me. I must have scraped my leg against the metal bar.”

“How long has it been since you’ve had a tetanus shot?” He pointed to the protruding bar the garbage trucks hooked on to for dumping. “That’s a pretty dirty piece of metal.”

Avery tensed, looking thoughtful. “I’m current.” She slumped against the dumpster, and the pitiful voice returned again. “This shouldn’t have happened, you know.” 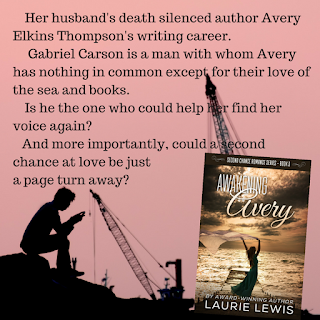 “It could have happened to anyone.”

“No.” She groaned the word more than spoke it. Her body shuddered for a moment and then her heartbroken eyes met Gabriel’s. “I don’t just mean the fall. I mean all of it. I’m not supposed to be here in the first place. Taking out the garbage was always his job, but even if it weren’t, I am certainly not supposed to be here, anguishing over the chore of tossing the memories out of my condo, because my husband is not supposed to be dead. Do you understand?”

Gabriel offered her a hand to raise her from her resting place against the dumpster. “Yes, I do. Better than you could know.” He stared into her eyes, trying to summon the brave portion of her to the forefront again. “I know what it’s like to have to decide what to do with the clothes they didn’t like in the first place or bottles of cologne that make you cry when you smell them and cry when their scent fades from the house. And then there are the trivial dilemmas like deciding what to do with the tins of buttons they collected off every article of clothing before it was tossed out, and what to do with the cards you sent them.” His eyes seemed weary and older somehow. “Oh, yes, Mrs. Thompson, I most certainly know.”

(If you enjoyed this excerpt, click here to buy the book.)

Posted by Laurie LC Lewis at 12:25 AM No comments:

41 FREE READS THAT ARE SWEET, REFRESHING, and CLEAN.

Relax and refresh with 41 FREE reads
that are sweet, cool, and clean. 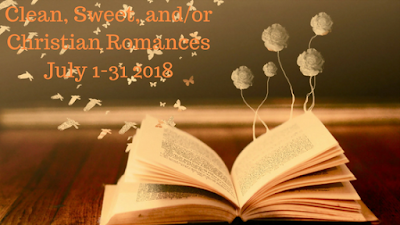 Posted by Laurie LC Lewis at 12:35 PM No comments: