BEHIND THE COMPUTER SCREEN

I haven't just blogged in a long time, ever since I got my newsletter up and running, so I'm taking a moment to say "hi," from back here behind the computer screen. Here's what's happening in my life.

My summer 2016 release, "The Dragons of Alsace Farm," won the New Apple Books Medallion for Inspirational Fiction, and is a finalist for a Whitney Award, and a semi-finalist for a Rone Award!

The Rones require a fan vote to weed the semi-finalists out from the finalists. I'll be coming back and asking for your support when my book's vote comes up. The Whitney winners will be announced at a banquet in May. I'll keep you informed.

My March release, "SWEET WATER," a romance for Gelato Books' "Destination Billionaires Romance Series, is in the middle of its book launch promo. It's doing great, but I have to say the romance web sites where "Sweet Water" is advertised can be pretty steamy. Whew! My book is a clean-read romance, and I think my cover is blushing. 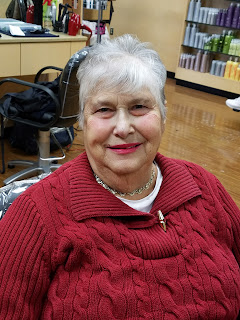 Mom
For those of you who've been following a while, you know my mother and her fight with dementia was the inspiration for the character Agnes in my award-winning summer release "The Dragons of Alsace Farm."

We recently went to the salon to get her spring haircut. She was pretty angry with me for allowing the stylist to cut her hair too short, but once she looked in the mirror, she was pleased with the results. She's beautiful, isn't she?

If you or a loved one are affected by this disease, find a support group, or read some books by others who are facing your challenges. It really helps. A group of authors called AlzAuthors write beautiful, compassionate books filled with hope. Each of us understand. 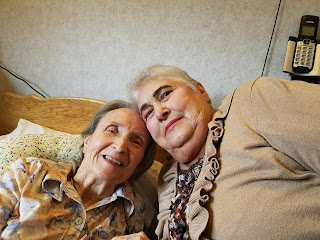 This next photo was taken the day I took Mom to visit her friend Michelle. We met Michelle soon after "Dragons" was released, and what a thrill it was. Michelle is another "Agnes."

Like my fictitious Agnes, Michelle actually survived the bombing of the Alsace Region of France during WWII. When only 12 years old, she served as a courier for General Patton, sneaking correspondence on her person to the Allies while she ran her little mail route. We're working on her memoirs. her story needs to be preserved.


Family Stuff
My husband recently had surgery. A quick 90-minute procedure with a 3-hour start to wake-up time frame turned into to eight hours on the table. It was a tender mercy. In our case, it was one of those times when God sets our attention on one thing to then help us find something else that otherwise might have gone unnoticed too long. Tom is doing well. He's sore and tired, but we're feeling blessed. 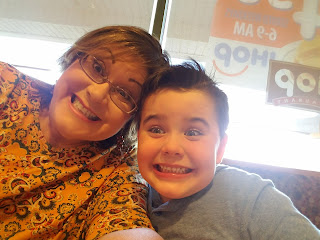 A grandson turned five last week. here's a silly shot from our breakfast date at iHop. The menu? Smiley pancakes and mac and cheese. He's a big eater.

Some people think we look a lot alike--same smile and nose. That would be pretty flattering because he is one cute little guy!

With so much going on, we're backing the schedule up a bit and delaying the release of the next book until later in the summer. I also had my rights returned on three other books, so we're kicking around a lot of possibilities, like new covers and re-releases, plus a new volume or two for "Free Men and Dreamers," and perhaps another stab at audios.

My newsletter is the best way to stay in touch with projects, my crazy life, special deals and contests, etc. Some offers are only for newsletter subscribers, so think about signing up!

I'm also still signing up beta readers for my "Willowsport Crew."  These readers get first and last crack at manuscripts before they head to the editors. Their comments, suggestions, and critiques make them an important part of my creative team, so if that sounds interesting, sign up for the newsletter and click the link to tell me you'd like to be part of "The Crew!" Here's how you sign up.

Thanks for listening! Really. Try the newsletter. It's awesome!!! Take a peek at April's and join us!
Posted by Laurie LC Lewis at 6:26 PM 1 comment: 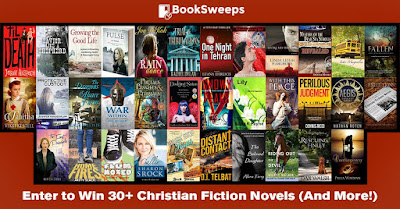 Today, I have a fun opportunity to share with you.

I’ve teamed up with thirty-three fantastic Christian Fiction authors to give away a huge collection of novels, PLUS a KINDLE FIRE to one lucky winner! 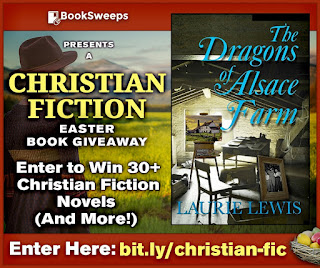 These are not romance novels, though love and faith are interwoven through many. There are clean, inspiring books for the entire family.

You can win my award-winning novel,

plus books from authors like Luana Ehrlich and Dan Walsh.

Posted by Laurie LC Lewis at 12:00 AM No comments:

Buy "Sweet Water,"
a contemporary romantic clean-read about
lost opportunities, betrayal, and second chances. The reviews have been stellar. Readers call it
"An emotionally stunning romance!" 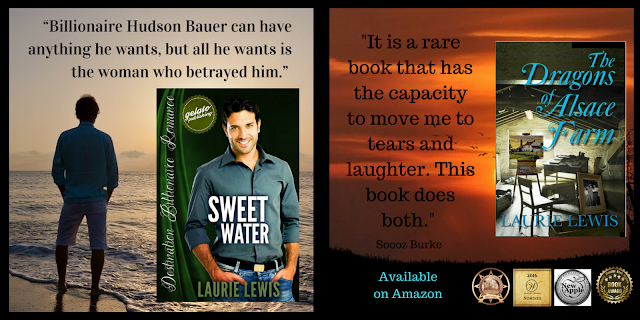 And get my multi-award-winning
"The Dragons of Alsace Farm"
for FREE.


"Dragons" received the New Apple Literary Medallion for Inspirational Fiction, as well as finalist status in The Whitney Award competition, and the RONE Awards.


Here's how to claim your free book.

2. Paste your Amazon confirmation message below in the comments section.

Thanks, and Happy Reading!!!