Author, friend, Andrea Pearson is running a promotion
I'm delighted to pass along. 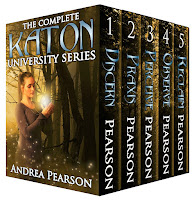 Hey, everyone! :-)Just wanted to let you all know that The Complete Katon University Series is only $0.99 for the next few days. It's originally priced at $9.99, and the individual books are usually at $4.99, so this is a savings of over 90%. :-) You can download it from Amazon, Nook, iTunes, or Kobo.Here's a description for the series:Nicole Williams has been chosen to lead a corrupt, anti-magic organization in a world revolution which will ultimately destroy all Aretes, including herself. But if she doesn't do it, a curse placed on mankind long ago will certainly lead to everyone's destruction.The Complete Katon University Series is an adventure of mystery, politics, romance, and fantasy from start to finish.Also, I've got a giveaway going with around $475 worth of stuff, with ten possible winners. Come check that out here! Lots of odds to win. :-) Good luck!  :-)Don't forget to download The Complete Katon University Series! :-) And if you know of someone who'd enjoy these books, let them know about this too - the box set won't be at this price for another year at least. Here are the links again: Amazon, Nook, iTunes, or Kobo.Have a great day. :-)Andrea
Posted by Laurie LC Lewis at 9:35 PM No comments: 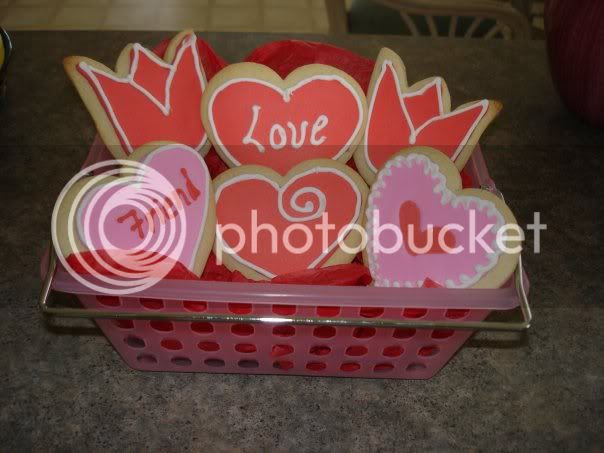 Today, I caught a magical little scene, one probably played out in a thousand stores everywhere, as busy dads herded children to displays of candies, and flowers, and cards, to choose a special Valentine's treat for Mom.

I watched a proud young father coach his toddler, whose chubby hands could barely hold the little heart-shaped box his Daddy presented, asking, "Do you think Mommy will like this?"

I smiled as a patient dad endured the manic excitement of three children who needed to touch every offering before a decision could be made.

At one store, a carnival-like atmosphere filled the entrance as the bakery ladies set up before the front doors, dipping strawberries, barely keeping up with excited shoppers who oohed and ahhed their approval as they filled their baskets.

As I hurried through the store aisles, I saw that father of three leading his children along as they collected what appeared to be ingredients for a special breakfast for Mom. We exchanged smiles as the children's enthusiasm bubbled up over each decision that needed to be made.

It was another reminder that, despite the clamor of news and woes, life is generally simple and sweet. Love abounds in most homes, even in its awkward, imperfect majesty.  Parents and children still conspire in the best ways. And there is still magic in chocolate.
Posted by Laurie LC Lewis at 7:26 PM 1 comment: