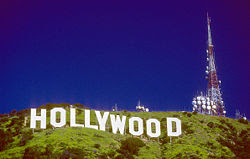 There is no question that the Hollywood establishment has pumped millions of dollars to fight passage of Proposition 8. Perhaps more upsetting is the influence they've peddled to voters, using their status and star power to influence voting and to persuade their fans, (might I say, the electorate) to vote "the Hollywood way".

I've already addressed how deeply saddened I was when one beloved celebrity went on the Jay Leno Show to issue a tearful plea to "stop the hate", her reference to the individuals who are fighting to protect the traditional understanding of marriage. I still can't understand why protecting the meaning marriage has held since the beginning of time is considered a hateful act. I wonder if anyone else would have seen it that way if Hollywood had not named it so.

I don't want to force anyone to do or believe anything. Free will is a sacred principle. But neither do I want to be coerced to call something right when I believe it is not, nor do I want to be forced to legally expand my definition of the traditional, historic, God-given meaning of marriage for fear of legal recrimination.

What happened to the separation of Church and State?

Hollywood exerts far too much influence. By painting the controversial with humor or victimization, what was controversial becomes sympathetic, until after seeing it frequently enough, it becomes the norm. Then, like the frog in the pot, we become deadened to the danger.

When a manufacturer produces something harmful or even possibly detrimental to my family, I don't buy it. When a vendor treats me poorly, I don't give them my business. When an institution betrays my trust, I withdraw my support.

In my mind, Hollywood has done all of the above, yet we give them our patronage. We fill the very treasuries they use to beat down our values.

I wish we could exercise the moral strength to boycott Hollywood--to consider our money as sacred as our votes. We wouldn't surrender our sacred vote to a candidate whose values undermine ours, so why do we turn a blind eye to the agendas of actors and production companies whose goals are so controversial?

I wish we would form an aliance, refusing at the very least, to pay ticket fees for movies or buy products from companies whose ads feature stars who openly, brazenly push these efforts. I wish we'd throw our support to those actors who bravely stand for truth and goodness, sometimes at the risk of their careers.

The next time we stand in line to buy a theater ticket or to rent a movie, let's remember that we're casting some of the loudest and most powerful votes available to us. And let's be wise.
Posted by Laurie LC Lewis at 5:59 PM