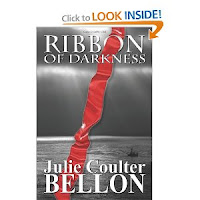 RIBBON OF DARKNESS
by
Julie Bellon


Clean, action-intense mysteries are hard to come by in today’s market, but veteran suspense author Julie Bellon’s recent release, “Ribbon of Darkness,” puts your attention on notice in the first paragraph and holds it to the end.

When Al Qaeda terrorists overrun an Afghan refugee camp, International reporter, Kennedy Campbell, becomes embroiled in the story she’s covering. Shots ring out as Kennedy and her three friends attempt a final escape plan. All four are separated, each facing their own danger. But Kennedy has a secret—a secret that makes her a valuable hostage and an imposing opponent. This lady will not be waiting idly for someone to rescue her.

British covert operative, Ethan Barak, believes he is cursed—everyone he gets close to dies. Revenge is on his mind as he goes rogue from MI-6 to infiltrate a swarm of arms dealers who’ve ordered a hit on his father. Confused, angry, riddled with guilt, his life has hit a turning point, and he doesn’t much care what happens to himself anymore.

Like a spider web, paths cross and purposes get entangled in this every-man-for-himself community of ne’er-do-wells. Ethan lays eyes on Kennedy at a moment when her captor’s patience has been exhausted, and her fate is about to be decided. Faced with the choice to avenge his father’s murder, or blow his cover and attempt to rescue the girl, Ethan makes his choice, affecting Kennedy’s fate, and launching an internal struggle that haunts every oncoming decision he makes.

Bellon tantalizes her readers by allowing her characters to momentarily cross paths, and then denies them a full convergence of Kennedy’s and Ethan’s separate plot lines until half way through the book. And when that longed for meeting between between Kennedy and Ethan finally occurs, the full richness of these battered good guys emerges.

Julie Bellon develops her characters slowly and subtly. Case in point was a beautifully-crafted moment where Ethan secretly cuts the cuff from his sleeve to provide a cloth to clean Kennedy’s wounds. It was understated, but it spoke volumes about Ethan’s character. Character-driven readers will embrace Ethan and Kennedy, and action-driven readers will delight in how the plot moves from threat to threat, from challenge to challenge, keeping pages turning.

And just when you think things are finally resolved, Ethan and Kennedy discover the depth of the international threat they’re caught up in. Iran, secret arms deals, nuclear armament, and threat they pose to the fragile strait from which the world’s oil ships—it’s all in here.

Bellon has done her research, drawing on current events and timely topics while introducing the reader to many details of the region and culture, particularly the Malacca Strait, otherwise known as the Ribbon of Darkness, from which the title comes. That she has succeeded to pace a suspenseful thriller around these topics and keep it clean and moral is laudable, though these efforts occasionally become didactic.

Nevertheless, with topics pulled straight from today’s headlines, “Ribbon of Darkness” is a satisfying read for adults, and a safe read to hand off to their teens, and better yet, it would make a perfect family read. It's available at LDS book stores, and on Amazon.