FREEDOM IS A GODLY PRINCIPLE 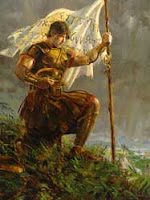 Iranian courts have handed down a death sentence to an Iranian pastor of a Christian church. Yusef Nadarkhani converted from Islam to Christianity at the age of nineteen. Now in his thirties, Nadarkhani founded a small Evangelical Christian congregation named The Church of Iran, but in October of 2009, he was arrested for heresy.

Both his first trial and his appeal ended in convictions. Nardakhani is now appealing to the nation's Supreme Court. If that appeal also returns a guilty verdict, Nardakhani must renounce his faith or be put to death under Sharia law. His wife is currently out of jail on her own appeal, and Fox news reports that Nadarkhani's defense team, though active muslims, also fear for their own safety and for the safety of their families, simply because they've chosen to represent this Christian man.

Speaker of the House, John Boehner, was the first U.S. official to issue a public outcry regarding this case. Bravo Speaker Boehner. Four hundred years ago similar religious freedom-seekers found themselves worshipping under penalty of imprisonment for daring to question the Church of England. Since the King of England was regarded as both the Britain's political leader and the conduit to heaven, rebellion against the church was also considered treason. Many of these religious rebels left their homeland as banished exiles, arriving in America, a barren land that grew into this great nation on the engines of liberty and free thought.

We still have our own struggles with this issue. Remember John F, Kennedy's need to delineate his faith from his governance? Remember Mitt Romney's statement in 2009 when the former Massachusetts governor felt a need to assure America that if elected president, he would serve "no one religion, no one group, no one cause and no one interest." But he did not backpeddle on his convictions, boldly adding, "I believe that Jesus Christ is the son of God and the Savior of mankind . . . My church's beliefs about Christ may not all be the same as those of other faiths. … These are not bases for criticism, but rather a test of our tolerance."

Yes, even we still struggle with religious tolerance at times, but what is happening in Iran is unconscionable. Perhaps the underlying themes of liberty and freedom prevalent throughout Christianity, and woven thoughout God's inspired word in many lands, are what terrify tyrants. Read these passages from the Old and New Testament, and from the Book of Mormon.

Galatians 5:13
For, brethren, ye have been called unto liberty; only use not liberty for an occasion to the flesh, but by love serve one another.

Galatians 5:1
Stand fast therefore in the liberty wherewith Christ hath made us free, and be not entangled again with the yoke of bondage.

Alma 46:12
And it came to pass that [Moroni] rent his coat; and he took a piece thereof, and wrote upon it—In memory of our God, our religion, and freedom, and our peace, our wives, and our children—and he fastened it upon the end of a pole.

Isaiah 61:1
1 The Spirit of the Lord God is upon me; because the Lord hath anointed me to preach good tidings unto the meek; he hath sent me to bind up the brokenhearted, to proclaim liberty to the captives, and the opening of the prison to them that are bound;

Alma 56:47
47 Now they never had fought, yet they did not fear death; and they did think more upon the liberty of their fathers than they did upon their lives; yea, they had been taught by their mothers, that if they did not doubt, God would deliver them.

Doctrine and Covenants 98:5
5 And that law of the land which is constitutional, supporting that principle of freedom in maintaining rights and privileges, belongs to all mankind, and is justifiable before me.

Alma 61:14-15
14 Therefore, my beloved brother, Moroni, let us resist evil, and whatsoever evil we cannot resist with our words, yea, such as rebellions and dissensions, let us resist them with our swords, that we may retain our freedom, that we may rejoice in the great privilege of our church, and in the cause of our Redeemer and our God . . . according to the Spirit of God, which is also the spirit of freedom which is in them.

"...the Spirit of God, which is also the spirit of freedom which is in each of His children."

May God bless you, Mr. Nadarkhani. We are praying for you.