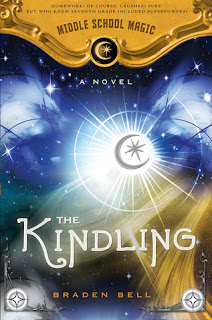 
(After this review was written I received word that The Kindling received enough nominations in its launch week to be considered for a Whitney Award--an impressive statement about readers' impressions of this MG fantasy.)

Homework? Of course. Crushes? Sure. But who knew seventh grade included superpowers?

Author Braden Bell’s long awaited, and highly heralded Middle-Grade fantasy The Kindling launched this week, and it was worth the wait . . . and all the hype. This is family entertainment at its best, a smartly-written, fast-paced, gripping spot-on, tour-de-middle school, with one exception—some of these tweens are developing special powers.
Twins Conner and Lexa Dell, and their best friend, Melanie Stephens are living the sweet life. Family life is good, and all three are privileged to attend The Marion Academy, a prestigious private school. The perks are great. Connor enjoys a sweet spot on the Lacrosse team, Melanie is the smartest girl in school, and Lexa is . . . well . . . Lexa.

But everything changes one day. Suddenly, whatever Connor thinks or feels begins occurring. Oddly, it’s also the day the sky splits with thunder, the hooded stalker appears on these seventh-graders’ street, and the day terrible things begin happening to the local pets and children. Soon Lexa and Melanie develop some previously unheard of talents as well, and worse yet, they all feel the same sense of dread. Something is about to happen, and they know that not even their parents can stop it.

All alone, they notice an increase in their teachers’ scrutiny. They seem to always be watching and sabotaging the friends at every turn. The three question whom they can trust, and more importantly, how to protect the ones they love. And then they realize that seventh-grade will never be the same again.

Bell’s delivery of seventh-grade life and language is pitch perfect, and why not? Bell, a beloved, doctorate-wielding, middle school drama professor works amid his subjects and target audience. When he’s not at his computer deciding what new dangers and mayhem to inflict upon his characters, he’s doing what he loves best, teaching and conducting research amongst his adoring middle-school students. And clearly, one of the beauties of this book is that Bell loves and understands this age group.

He has deftly created a rich cadre of vulnerable, multi-layered characters youth will find it easy to cheer for, empathize, and identify with. The school setting is drawn so clearly you can practically smell the gym socks, and the action is described in such crisp detail one can easily “see” each battle play out like a movie. I hope someone actually makes The Kindling into a movie.

One of the challenges facing a fantasy writer is the need to create a unique world with rules and consequences within which the characters must function. The Kindling’s world is chock-full of rules, conflicts, and consequences that build tension and suspense. At first glance, readers may see similarities between The Kindling and the “Harry Potter” books, but while both benefit from proven literary devices common to this genre—namely powerful, older teacher/mentor figures like Dumbledore, Gandalf, or Obi-Wan Kenobi; and the idea of magical or mystical powers—the seemingly subtle differences are important ones that become increasingly evident the more one examines the story.

The Kindling’s appeal deepens with contemplation and analysis, and that’s not by accident. Like Bell’s first novel, The Roadshow, aimed for an older audience, Bell always digs deep and writes what he knows and cares about—faith, family, and youth. In the case of The Kindling, Bell is in his wheelhouse delivering a book that satisfies on many levels.

On the most basic level, The Kindling is great whole-family entertainment with no agenda but to delight its readers, but Bell’s tale of good versus evil, and the temptation, destruction, and redemption of souls, lends itself to deeper interpretation for spiritually-minded people. LDS readers will find even deeper symbolism within its pages.

Personally, I love that Conner, Lexa, and Melanie come from imperfect but solid, loving families, a near anomaly in today’s youth fiction. I appreciate that further support comes to these youth not from a gaggle of smarter-than-any-adult friends, but from other caring adults, another increasingly rare occurrence in current national literature.

Finally, I love this book because without ever becoming preachy or overtly didactic, Bell presents a fun read whose values are strong, clear, and unapologetic. The Kindling is a book parents will enjoy with their kids, tweens, and teens. It offers a host of opportunities to launch great discussions on a wide variety of topics such as loyalty, trust, courage, temptation, sacrifice, gratitude, revenge, faith, and many more.

When The Kindling ended, all my major questions were answered, but Bell left enough breadcrumbs to make me want to continue the journey. Readers will be relieved to know that sequels are planned for this series, and Braden Bell’s Kindling web site is stocked with additional information, trailers, and background material.

This gem is published by Cedar Fort Publishing and can be purchased on Amazon, or at your local LDS bookstores. Autographed copies are also available through the author’s web site.

Here's the blurb from the back cover of the book:

Loud shrieks sliced the air, followed by the smell of burning cloth. Conner looked over in time to see Geoffrey jumping up and down, yelling and shrieking. Smoke poured from the seat of his shorts while blue and yellow sparks snap-crackle-and-popped all around the heater.

All thirteen-year-old Connor Dell wants to do is pass pre-algebra, play lacrosse, and possibly kiss Melanie Stephens. He didn’t mean to set anyone’s gym shorts on fire or make school lunches explode. But now that the strange powers inside him have been ignited, Connor’s normal teenage life is about to go up in flames!

This fast-paced novel is non-stop fun for kids and parents alike. With characters you can’t help but root for, a plot that keeps you guessing, and plenty of humor, it’s a guaranteed thrill ride from cover to cover!
*******