BOOK NOOK REVIEW: "A Is For Abinadi," written by Heidi Poelman, Illustrations by Jason Pruett 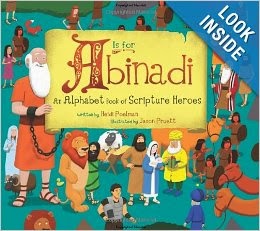 A is for apple but also for Abinadi! Teach your children about some of the greatest heroes in the scriptures with this beautifully illustrated alphabet book. They will love searching for items that represent each letter while they get to know heroes like Captain Moroni and Esther. Along with learning their ABCs, your children will learn to recognize and love these great Book of Mormon and Bible examples.

There is plenty here to launch great teaching moments on gospel themes. Poelman chose great heroes from both male and female scriptural characters. Her short story text is written in easy language, capturing the essence of these beloved Biblical and Book of Mormon characters and stories. Poelman's captions also reinforce values and positive character traits.

Pruett's bright, engaging illustrations provide a beautiful palette from which to teach the same lessons visually. There are stories within each picture as readers examine the enticing details Pruett adds to reveal the subjects' character. The Biblical hero Uriah looks anything but heroic, and yet, quivering knees and all, he is fighting for his king, his country, and his people. Imagine the wonderful discussions that picture could launch on the idea of what true courage really is.

But there is still more. Teach the alphabet using the names of the featured heroes, and search for other things on the page that start with the same letter. Play "I Spy," reinforce colors, and let your little one practice his or her own storytelling skills by telling you what they see on each page. This book is a treasury of activity that will add reverence and entertainment to your family.

A Is For Abinadi is available at Amazon for $10.79 in hardback. You can also download this delightful book to your Kindle or iPad for $5.99. I'm giving hardback copies to my grandchildren, and downloading the Kindle version so I have a better alternative when grandchildren ask to play on my iPad.

Email ThisBlogThis!Share to TwitterShare to FacebookShare to Pinterest
Labels: A is for Abinadi, Children's Alphabet books, Poelman, Pruett