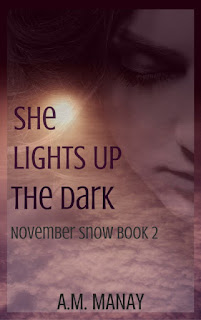 I'm pleased to host one of RAVE REVIEWS BOOK CLUB's Author Spotlights. My guest is paranormal author A.M. Manay, whose most recent release is She Lights Up the Dark, book two in her well-received November Snow  series.

Below is an online news interview with Luka Lazarri, vampire king and the primary villain in my November Snow Series.  The piece is set at the beginning of She Lights Up the Dark (November Snow Book 2).  Spoiler alert!  At the start of the second book in the series, he has just taken over the fairy and vampire kingdom once ruled by his father, Ilyn.  Be advised that Luka plays fast and loose with the facts here as he attempts to spin events to his own advantage.

Maria Carson for the Kingdom News Service: Your grace, thank you so much for taking the time to speak with us during this busy transition. 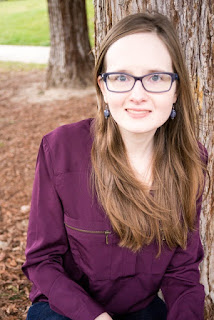 Luka: Of course, Maria.  A king must always make time to speak to his people, especially during difficult moments.  I know many of us are in deep mourning after the slaughter so recently perpetuated by my father, Ilyn.  Our dead and injured in Las Vegas and in Arizona cry out for justice.  I want to assure you that I stand with you, and that every measure is being taken to address the threat posed by the former king and his supporters.  We are working simultaneously to bring stability and order to the Kingdom after so many decades of Ilyn's, shall we say . . . haphazard rule.

MC: I understand that state leaders have now all pledged fealty.  Is that correct?

Luka: Indeed, Maria, I have the full support of local vampire and fairy leadership, thought there are still small pockets of unrest in isolated areas.  They will soon be quelled.

MC: Is it true, your grace, that Lady Savita and her son Gregory, former Lord of California William Knox, and former Premier Hazel participated in the wanton murder of their fellow fairies and vampires in Arizona, as ordered by Ilyn?

Luka: Sadly, it is true, though the guilt must be borne primarily by Ilyn and William.  They, alas, took advantage of the loyalty and trust of their subordinates.  If Savita, Gregory, and Hazel wish to pledge loyalty to the new regime and to repudiate my father and brother, I am prepared to offer them pardons in light of their many years of service to my mother, Marisha, the last legitimate ruler of the Kingdom.  I urge all our citizens to keep vigilant and to report any sightings of these former leaders who have so betrayed their duty.  Ilyn and William have shown that they pose a grave danger to all of our citizens.  Anyone assisting them will share their fate.

MC: Your grace, there have been many rumors about the so-called "Oracle," November Snow.  What can you tell us about her?  Are her precognitive gifts confirmed?  Is she also a fugitive from justice?

Luka: Ah, dear November.  She is yet another innocent victim of my father's dangerous temper and lust for power.  I am pleased to say that she is now a vampire, and I have rescued her from Ilyn's grasp.  Her gifts are indeed remarkable, and she will soon be joining my court as an advisor.  I am keeping her temporarily out of the public eye in order to give her time to adjust to her new life as a vampire.  As you know, those early days can be . . . challenging, and I wish to spare her the additional burden of public scrutiny as she finds her way.  Rest assured, she is now one of us, and my most trusted allies are taking very good care of her.

Luka: I would encourage our dear citizens to focus on rebuilding and preparing for the next phase of our Kingdom's history.  It is our destiny to take the reins of power from the human government, and our moment of triumph is nearly at hand.  We have already achieved a revolution.  Revelation and rule will soon follow.

So, what do you think of Luka's attempt at spinning the events at the end of She Dies at the End and at the beginning of She Lights Up the Dark?  And who should play him in the movie once I get discovered? ;-)

Brief description of She Lights Up the Dark

A frightening vision stalks November, even in her grave . . . and things go severely sideways just as soon as she claws her way out of it.

Continuing the story begun in the well-received paranormal romp "She Dies at the End," "She Lights Up the Dark" finds November Snow struggling to adjust to her new life as a vampire with none of the support she'd expected. Her nemesis Luka has plotted to isolate November and scatter her allies as he executes his plan to bring human society under his control. Her loneliness leads her to become emotionally entangled with a charming but likely untrustworthy fellow vampire.

When danger flares, November discovers that her psychic gift has expanded in a powerful and perilous fashion. Coerced into close company with her enemy, she fights to master her power and to uncover the secrets that may help her to save both her friends and the human world from being crushed under Luka’s boot. November is determined to stop Luka as his plan builds toward an unknown and deadly climax, but she may find that lighting up the dark comes with a high price to pay.

This books contains violence, some sexual content, and occasional profanity.

Email ThisBlogThis!Share to TwitterShare to FacebookShare to Pinterest
Labels: A.M. Manay, author Spotlight, Guest post, November Snow, paranormal, RRBC, She Dies at the End, She Lights Up The Dark