THE HEALTHCARE CRISIS AFFECTS US ALL

I try not to wax political too often. I have strong opinions, but this doesn't seem to be the place to vent them, except maybe on this topic, because it's a universal concern. 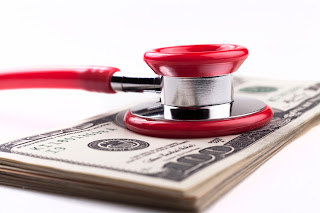 The greatest budgetary unknown for most Americans right now is healthcare. No matter how responsibly we plan, most Americans are simply holding their breath to see what happens, whether it's concerns over the future of Medicare, how far personal healthcare dollars will go, or whether employers will offer healthcare, or if the ACA exchanges survive.
Maryland's failing Evergreen Health Insurance Group provides a sobering, but honest, current glimpse at what we're all up against. (I give this information to help people being held hostage by this problem. Not to foment hate and argument, so please see this as useful information and not as a springboard to rant about presidents past or present.) Here's my update:
I spoke to a former principle at the company who said Evergreen was healthy and well-situated with twice the reserves needed to fund claims four years ago. A few things happened.
1. Although Evergreen is a not-for-profit-company, it had these aforementioned reserves. Under the ACA, (Obamacare), private insurance companies with profits and reserves were forced to bailout companies who were bearing the public burden of the ACA, like Carefirst. That bailout cut too deep into Evergreen, forcing them, like all other insurance carriers, to raise prices.
2. As promised, Evergreen honored their 2015 prices going into 2016, with only a modest increase in prices, which raised too little additional revenue, and the death spiral began. In 2017, they raised the prices on their policies by about 30%, but it was too late.
3. The Maryland State Insurance Commission jumped in as as soon as they saw the tip of the scales. They tried to help Evergreen find Investors to help them ride out the storm, but the Investors, (other health co-ops), pulled out in May or June, sealing Evergreen's fate.
4. The Insurance Commission is still trying to find investors. It doesn't look good.
Evergreen patients have been assured they still have coverage, although they might have to drive longer distances to find a doctor who will still participate at the risk of never being paid. If you've met your deductible, you might want to hang in there. If you leave and find a new carrier, you will have to start over to meet new deductibles.
My eval on all this. Everyone loses in this ACA scenario.
The carriers who support the ACA exchange aren't solvent because the cost of care is not supported by premiums and company investments. Competent, healthy insurance carriers go under because their business model is upset when they are forced to bailout those who are protecting the ACA.Patients who counted on a certain plan with certain trusted physicians find that those doctors are leaving before reimbursement ceases. By law, physicians must keep their patients for 90 days despite their failing insurance, which means in some cases, that they are treating people with no reimbursement.
The system is badly strained. Maybe broken. Can it be fixed? I want to lock the entire Congress in the Capitol until they figure it out--the Dems who raced into a plan some knew was destined to eventually fail so they could "start the conversation about single-payer," and all the republicans who sat on their hands for seven years, blathering and about what they'd do, and then didn't.
Call your congressmen and senators.
Every day.
Tell them to get back and fix this.
Now.
Evergreen was a good company. It will not be the last to go under.
Call.
https://www.house.gov/representatives/
https://www.dailykos.com/…/-Call-your-senator-Phone-numbers…
Posted by Laurie LC Lewis at 3:22 PM