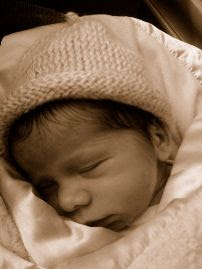 I spent last night in Washington DC. It is impossible not to note the buzz of Inaugural preparations--bunting and banners hung on buildings, clogged and diverted traffic patterns, the influx of people from every corner of the globe, their beautiful accents present in every restaurant and shop these days. Every hotel circumferencing the city for dozens of miles is filled as thousands arrive to watch the changing of the presidential guard. But only one arrival and one type of "changing" has occupied our minds--the "Long-ed" for birth of Brady Nicholaus Long, first born child of my daughter Amanda and her wonderful husband, Nick.

Born January 15th, at 7:05 p.m., Brady's birth was a miracle of science and of faith, though I'm not sure a differentiation is required. After all, even those miracles that come by the gifts of science are still gifts of faith--tender mercies of God whereby He bestows a mortal sliver of His knowledge and power to man through education, and then stands back and assists trained hands and minds to function in Godly manner. Are these wonders therefore, any less miraculous?

Amanda does not dwell on the medical challenges she has overcome to have little Brady. In fact, she prefers for people not to know about her past, because her present is so bright and joyful. But today, perhaps, it is all right, and perhaps even needful to briefly tell her story, to give thanks for the blessing of Brady's birth, and to give hope to others whose paths may seem too hard or even impassible.

Amanda faced two serious, even life-threatening medical concerns within six years of one another--Pseudo-Tumor Cerebri, a neurological threat; and kidney failure necessitating a transplant. Blessed to live in an area where several of the nation's best hospitals are located, with patience, faith and perfect obedience to her doctors, these threats became mere delays to her pursuing the goals she has always dreamed of--to be a wife and a mother.

Determined to prove to Amanda that he would stand beside her no matter what, Nick proposed to her a few days after she discovered she would need a kidney transplant. A few months later, they were married in the Washington DC temple, and seven months later, she received her new kidney. The following two and half years were miracles in themselves. Amanda felt better than ever, and confident that her body was ready for the delicate process required to prepare for a child, the doctors began weaning her off some of the meds. The pregnancy went perfectly, owed partly to Amanda's complete obedience to every request made by her medical team, partly to Nick's unwavering support, and fully to the blessings of Heaven.

The process of bringing Brady into the world began Tuesday evening, but despite the best efforts of skilled, caring doctors and nurses, little progress was made, and his expected birth date of Wednesday, January 14th passed without his appearance.

Things were beginning to happen on Thursday morning. Pop Pop had to leave for the airport for a scheduled business trip and I headed south to Washington DC and the hospital. I made it to within five miles of Georgetown University Hospital when a police car blocked the road sending the traffic off to parts utterly unknown to me. Cursing the Inaugural practices as the cause of my critical delay, and "brave" pioneer that I am . . . I drove back home to spend time with Map quest and to rethink my sarcastic disdain for peoples' attachments to their GPS units.

Hours later, after speaking to the Metro Police, the Transit Authority, and several hotel reservation representatives, I began again, armed with maps and directions for multiple routes. Traffic was dreadful but I arrived well before the decision was made to deliver Brady by C-Section.

The surgeon had a difficult task ahead, to navigate around the oddly-placed transplanted kidney, and other oddities resulting from her Pseudo-Tumor. The stress of awaiting word from the OR was broken by a loud baby cry. Brady was finally here and Mommy, Daddy and Brady are each doing wonderfully.

We feel so blessed and so grateful to Heavenly Father. I think we take for granted this process of birth. No matter that it happens a million times over, each health baby and mother is a miracle. We have four miracles now, and the other three came at great cost to their mom as well.

We should pay honor to all mommies and daddies. This is a tough world and we owe a great debt to those who birth and to those who conscientiously rear children.

To Tommy, Keira and Christian: Grandma loves you more every day, if that's possible. And now you have a new cousin! Hooray! 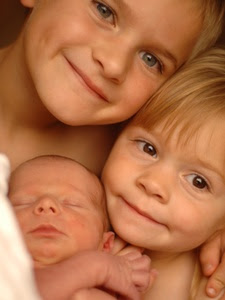