THE FOG OF MOTHERHOOD 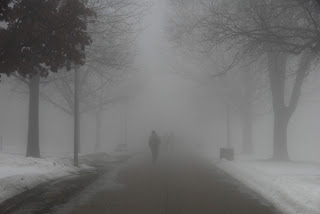 While driving along in the car, my husband frequently asks, "Do you remember the time we ate at. . . ?" Or, "Do you remember the time we . . .?" Invariably, I don't. Maybe, just maybe, on a good day, I'll remember some small remnant of the tale, and I'll twist my face up in worry and timidly reply, "Vaguely," while wondering if I need to immediately put a brain surgeon on speed dial or call up my local psychiatrist to discover why all my memories are erasing.

It sounds like a scary horror movie, doesn't it? I really began to worry that I might have some sort of early onset of aphasia or some mental block. I considered Ginko Biloba and a host of other supplements. And then I got a clue to the real culprit.

My daughter recently had her second baby in eighteen months--not unprecedented, but certainly daunting. She calls from time to time to have me sit for an hour so she can nap. One look at her tired eyes, or her rounded fatigue-burdened shoulders and I remember why my memories are vague. I think I lived in a ten-year fog during which I kept everyone alive, probably faked being awake well enough to raise emotionally-stable kids, but have few solid memories.

I've heard that fatigue in my daughter-in-law's voice for years, which is why I try to get out there from time to time to give them a few days' escape each year. But now I can see it on a daily basis, and I have begun to wonder if most mommies can't admit to a gap in their recall.

It's sad . . . heart-breaking, really. My adult children will look at their own children reaching certain developmental stages and they'll ask, "When did I do that?" I try so hard to sort out all the little feet, the rolling babies, the gooey-faced teethers, the hours spent singing the family potty song, "Push the Guck, Push the Guck, Waaaaayyyyyy out!" to all my children, but I can hardly sort out one face from another. Oddly, my husband, who in his previous-generational macho-phase barely changed a diaper or bathed a tush, can.

So yesterday, after returning home from the pediatrician's with yet another bout of toddler illness, I looked my tired Amanda in the face and said, "Write it down in a journal or baby book. . . write it all . . . the cute moments, the landmark first steps and first songs, the day eyes turned from baby blue to brown, the day Brady fell asleep curled up with the Lab, and the moment Avery gave you her first real smile . . . write all of it down, because you will forget. You think you won't, but the fog will get you, and someday, you'll be sad.
Posted by Laurie LC Lewis at 3:42 AM