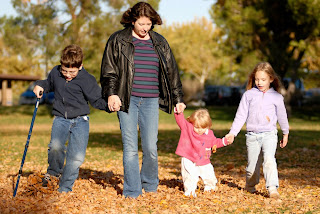 I visted an Early Morning Seminary class this morning and watched sleepy teens stroll in to be greeted by steaming cups of teacher-prepared cocoa, and smiles that were just as warm and soothing. After an hour of bathing in the sweet power of the Spirit, I watched them shuffle out, renewed and refilled, ready to face a day of battle in the arena of popularity and public opinion. I wasn't worried for them. They were armed with another day's complement of hope and love, and the world would be better for their influence.

Such hope comes in small packages, like the sight of a family meeting together at a park with a sack of hamburgers in tow, greeting a dad who popped by with kisses and smiles, to likewise be renewed before returning to his corporate battleground. I watched the father arrive--wearied by noon--but instantly brightened when a rosey-cheeked toddler, having caught the first glance of Daddy, began picking his way through the grass to reach those outstretched arms. I wanted to grab that good mother and hug her for making the effort. Her husband would leave that park knowing by whom and where he was best loved. No other arms would lure him this day. No business opportunity would loom bright enough to make him risk falling from the pedestal that child placed him upon. Again, I felt such peace and hope.

On the way home I followed a bus that made innumerable stops where moms opened their car doors, ushering their precious cargo out with kisses and reminders of homework and lunch boxes. The children were smiling. Life is good. Life is sweet. Life is wrapped in safety and love and order, and the hope bubbled ever more within me.

It's still pretty early here. My husband, who works on California time, is probably still in bed enjoying an episode of some old 1960's western as he coaxes the kinks out of his back. I'll mosey back there and watch the ending with him, giving him a kiss during the credits. Maybe we'll have oatmeal today. That sounds soothing to me on this brisk morning.

Yeah. . . hope and peace come in small packages, reminders that where love exists, great miracles are possible. That's my daughter's favorite saying. I saw a few of those today, and it's only 8:30 A.M.
Posted by Laurie LC Lewis at 8:11 AM