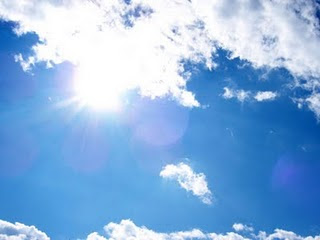 I remember the impressions of that day so well, but the memories are not so clear, jumbled up in emotion rather than logic. Who could have known what that beautiful day would bring--the crisp bright sky with beaming sun-rays piercing the morning. School was back in session, but I had left my position with the school system at the end of the previous school year and this fall was the beginning of a less-complicated, more peaceful writer's life.

Or so I thought.

I had risen early, feeling sick that day. I looked out on that perfect, pristine morning sky and decided to enjoy the luxury of unemployment--being able to sleep in until my head stopped spinning. Tom had left earlier to head to DC for a conference with the military computer buyers. He was only miles from the Pentagon.

I turned the Today show on to catch up on the morning's news and immediately I knew something terrible had happened in New York City.

My immediate reactions was likely similar to those of everyone else--run a quick inventory of the family. Where were they and did they know? I called my recently widowed mother who was angry and frightened. As soon as I felt she was calm I began calling the kids, and the the unthinkable happened. The Pentagon!

Tom called to say he was all right and to describe the organized chaos unfolding as officers scrambled to return to code red duties. We all wondered what was coming next. Our middle son appeared to be safe, tucked away at school in Utah, but we had a son in Philadelphia, another important east coast target, and our daughter had returned home, having transferred from Ricks College in Idaho to UMBC in Baltimore, and our youngest was in high school, placing the largest portion of our family in the hot zone between DC to the south, the biological-weapon storehouse at Fort Detrick to our west, and the Underground Pentagon a few miles to the north. 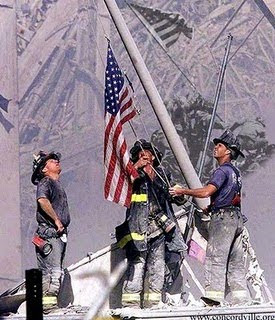 Two friends had sons living in New York at the time and a member of our congregation was supposed to be in a meeting at the World Trade Center that day. Just weeks prior, Amanda had driven her friend to his new NYU digs mere blocks from the financial district. They even grabbed lunch at an eatery in the World Trade Center so she knew exactly how close he was to Ground Zero. No calls were getting in or out, but as images began showing hordes of people walking, running, fleeing over the bridges, we all prayed and waited and hoped.

Once the second plane flew into the south tower our innocence was stripped away. This was no accident . . no error. This was a exquisitely-planned assault. And when flight 77 crashed into the Pentagon, all bets were off around here, and everywhere. Anything was possible, and even likely to happen.

Eventually we heard from our friends in New York. Some fled across the bridges on foot in a mass exodus. Amanda's friend was within blocks of Ground Zero when the attack occurred. Our friend from church had been delayed that day. Had things gone as originally planned, he would have been sitting in a meeting, trapped inside. The things they each witnessed were indescribable--tales of horror, tales of great courage, of great humanity in response to unspeakable inhumanity.

Like the heroic passengers of flight 93, good people of conscience set the bar high for all of us, and in turn, 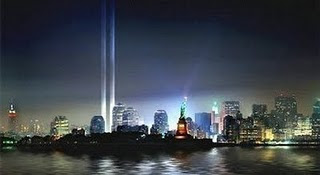 we responded beautifully.The next day, like many of my neighbors, like many of yours, I'm sure, I rushed to the craft store for red-white-and blue ribbon, but there was none to be had. The shelves were picked clean by the dozens of people already in line to cash out or waiting for the bow-makers to create a patriotic tribute for them.

Bows and ribbons, flags and banners waved from everything and everything. We came together. We were one nation under God again. We were humble and grieving, but defiant and ready. We were bent, but not broken.

Here's a link to a timeline of that days events. It's hard to read, but remembering is important, but as we remember we must also temper our pain with civility. The date is again harrowing up powerful, potentially destructive attitudes.

Mark DeMoss, and Lanny Davis, two men of opposing political views have found enough common ground in their love of America and her core ideals that they have overcome divisiveness and become good friends. Together, they authored an article for the Washington Times entitled, "Civility Makes Strange Bedfellows” in which they call for a new civility in our public life. They've also formed a civility initiative which you can read about at http://www.civilityproject.org/.

The basic premise of the project is a threefold pledge which any person of conscience should be able to accept. The pledge includes these three promises:

I will be civil in my public discourse and behavior.
I will be respectful of others whether or not I agree with them.
I will stand against incivility when I see it.

Perhaps just reading the pledge makes us each realize we need to tweak our attitude.It doesn't mean we dilute our personal beliefs, or abandon long-standing values or positions. It's all about the manner in which we express our opinions and the tactics we employ to create change.

Today is a day to respond with reverence, service, civility and love. Let's return to our knees in prayer. Let's fast and pray to God for help, for guidance, for wisdom, for aide. Let's smile at one another in unity and love. Let's make the air ring with the Pledge of Allegiance, with the Star Spangled banner, with the sounds of joy.

We are Americans! We are proud to wear that title.
God bless this land and all her people.