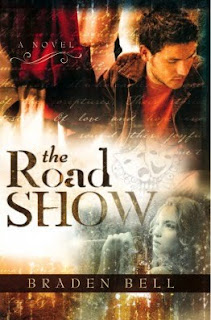 THE ROAD SHOW
by
Braden Bell
I’m a visual learner, so tell me a story that leaves an image in my mind, and I’ll remember it forever. Braden Bell is as much a story-painter as he is a novelist, and the images created in “The Road Show,” of troubled people famished for relief and salvation, are vivid and all too familiar. We know such people. We are the hope of such people. At times, we may be such people.

Stephen E. Robinson’s simple but profound book, “Believing Christ,” has long been my favorite doctrinal book on the Atonement. Braden Bell’s treatment of the healing power of Christ in his novel, “the Road Show,” touched me with equal power.

Scott Jenson hates everything he knows about road shows, especially the cheap costumes, silly songs, and bad acting. So when he finds himself agreeing to be the road show specialist, he wonders how he can do it without becoming the biggest fool in the ward. From miscues to missed practices, Scott directs his crew of amateur actors all while hoping that no one finds out about his secret.

Is there any way that this trivial road show could have a healing effect on those who participate? A pornography addict, a depressed young mother, a sick older sister, a lonely outcast, and a spiritually numb elder’s quorum president are about to find out.

The Road Show is Bell’s debut novel, but this actor and music/theater teacher weaves his tender story around a world he knows well, intuitively crafting the character of Scott Jensen as a gifted but floundering theatrical student who is pressed to direct what many consider to be the lowest level production on the theatrical food chain—a church drama contest called a “road show.” Bell’s setting provides a brilliant vehicle to assemble a mismatched group of characters in a situation most readers can relate to. And though Bell’s book doesn’t dismiss the stereotypical elements that characterize an amateur production, the theme of the road show competition, “Our Savior’s Love,” drives the story, elevating this tale far beyond a parody to an introspective parable about the power of the Atonement of Christ.

Braden Bell’s characterizations deftly illuminate the struggles of the five primary players with power and sensitivity, endearing them to the reader, many of whom will no doubt see themselves in at least one of Bell’s spiritually-hungry cast members in need of succor. Each seems to be stalled at the cusp of hope and hopelessness, and we want to cry out, “Try! Please, just try!” Ultimately, the show’s theme proves to be providential, and therein lies the beauty of The Road Show, which serves as a reminder that the Savior’s love can be found in the most unlikely places.

The Road Show is a healing story, a book that elevates and awakens the desire to reach out to others. At 119 pages, it’s a quick read, making it a perfect gift book. Published by Cedarfort, this splendid must-read is available at Amazon and at your local LDS book store.
Posted by Laurie LC Lewis at 4:18 PM