THE YEAR THE TRICK WAS ON ME 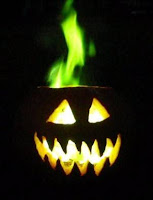 I am a proud member of “The McGyver Sisterhood,” women who find . . . shall we say . . . unconventional ways to accomplish needed tasks. Why reach for a hammer or a screw driver when a shoe heel and a table knife are handier and equally suited for most household tasks? I applied that same level of ingenuity to my holiday decorating regimen.

My household decorations were elaborate—not classy or elegant--but displaying the appropriate level of Dollar Store gaudiness requisite for the season. We were not a family capable of transforming field squash into masterpieces, but one year I had a particularly vivid vision for our Jack-o-Lantern. It would be more than a token triangle-eyed pumpkin. I would create a vignette!

I envisioned a scarecrow sitting in a lawn chair, holding our precious Jack-O-Lantern in his lap while a bowl of candy sat at his feet. I built a head and a pair of hands from stuffed nylons and quilted them into perfect form. Then I selected clothing items appropriate for a dapper scarecrow.

To my dismay, I didn’t have enough stuffing material to fill our friend, but I remembered the full basket of ironing in the hall closet. Most of the pieces were my husband’s—dress shirts and slacks he probably wouldn’t need for days. The items perfectly plumped our scarecrow, and with a few minutes of staging, our “man” was seated by the driveway in a nylon-webbed lawn chair.

A few rudimentary cuts produced another slack-jawed, triangle-eyed pumpkin face, and a four-wick pillar candle illuminated our Jack-O-Lantern which sat merrily in our scarecrow’s lap.

With the stage set, we packed the troops into the car and headed off to Trick-or-Treat. Up and down the road we heard complimentary reports about our festive scene, and when we returned home the effect was so darling we decided to let it remain lit until the candle burned down.

The next morning I received a call from a neighbor. “Did you guys have a bonfire last night?”

“Oh. Then I wonder who had the fire blazing last night. It looked like it was coming from your place.”

Tom enters. “Honey, do I have an ironed shirt ready? I have a meeting today.”

I opened the door and looked outside, expecting to find the scarecrow still sitting in the morning fog, but there was nothing. Where is the scarecrow stuffed with Tom’s clothes? I gasped. Had I put it all away for the night?” I was almost certain I had not.

A few steps later, my fears were realized as I came upon a burned circle six feet in diameter and mere inches from my car, in the exact spot where the nylon lawn chair had been placed the night before. All that now remained was the charred chair frame, a few dozen blackened buttons, and the gargoyle-like face of a roasted pumpkin. I gasped as I saw evidence of felony arson. And the perp? My Jack-O-Lantern.

The fat, four-wick pillar candle had burned down to a sea of wax that filled the base and flowed from the Jack-O-Lantern’s mouth. Embedded within the wax, like a fossil stuck in prehistoric amber, was one of the four wicks. The other three, I deduced, had been released as the candle burned down. They floated out of the pumpkin’s slack-angled mouth and into the scarecrow’s lap, turning “Jack” into a flaming torch.

The miracle, of course, was that the car had not exploded from the heat of the fire. Perhaps that was also the treat. But the trick? Well, that was played on me.
Posted by Laurie LC Lewis at 10:53 PM