CONTEST QUESTION OF THE WEEK: Who Has The Greatest Influence On a Nation?

God or Government---
Who Has The Greatest Influence On a Nation?

This is a fundamental theme behind all the Free Men and Dreamers books, but it is the primary force behind volume five, the concluding volume of the series, "IN GOD IS OUR TRUST," and the question you'll have to comment on in order to enter this week's giveaway. I'm offering a winner's choice of 3 great patriotic prizes.

Did, or even could, the Founding Fathers have realized the religious fallout that would occur following the break with Britain. They had calculated the political, military, social and economical concussions, but could they foresee how being cut off from the king, the supposed conduit to God, would affect the faith and worship of the fledgling nation?

And how would America bridge that break? Who would be their advocate to God? And how? It left a spiritual vacuum.

Would they model their new churches on the model of the Church of England many thought was corrupt? And what of the immigrants from foreign lands with their different religions, different views of deity?

One of the first great tests of the freedom to worship began immediately.

In the interim, they sought stability through government, but the Founders were aging and dying, and a new generation of visionaries was needed.

America remained a weak confederation of states, having never achieved the vision of "one nation under God."

Citizens' loyalties were to their states, not their country.

The years preceding the Revolution churned with political tumult that did not settle with the end of the fighting. Even the signing of the Constitution did not lift Europe's boot from America's throat, until a strangling America was forced to go to war again to end Europe's oppression once and for all.

The War of 1812. It cost both nations dearly in blood and treasure, and secured no great concessions of land or rights for either side.

Some call it a nothing war, but historians agree it changed America forever--

It produced a new generation of leaders just as the last of the Founders were passing away.

It produced national pride that relaxxed attachments to individual states. We were no longer just Virginians or Marylanders or identified by our state. . . We were Americans.

It unified a weak confederation into The United States of America.

It produced the first icons of America--a victory flag lovingly titled the Star-Spangled Banner, and the song that heralded its appearance over an embattled fort.

It catapulted a respected America onto the world stage.

It opened trade doors that had previously been blocked.

What else did it do? Let IN GOD IS OUR TRUST show you.

A decade of peace and prosperity ensued between 1816 and 1826. With our energies no longer focused on war and defense, religious debate began anew, spawning a new religious reformation. In the middle of that decade of peace and spiritual searching a boy emerged, claiming to have spoken to God and His Son, and America's claim of religious tolerance was put to the ultimate test.

Within the pages of IN GOD IS OUR TRUST, Jed and Hannah Pearson experience each of these changes in America, alongside the people whose lives have intersected with theirs during the war. Like Jed, many believe America's strength lies in strong government. Hannah and others believe God holds the answers to America's future. When tragedy again strikes the Pearsons, Hannah is reacquainted with a young man named Joseph Smith, whose tales of visions and gold plates divide families, and test the mettle of the Constitution.

The prize this week is one I'm very excited about. The bicentennial of the War of 1812 begins in a few months, launching a two-year celebration of wonderful American history. In 1814 we will celebrate the two-hundredth anniversary of our national anthem, The Star-Spangled Banner, and the 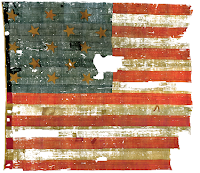 flag it commemorates. For this week's prize, I'm offering a winner's choice of one of the following:

1. A replica of the fifteen-starred flag that became known as the Star-Spangled Banner.

2. An unframed, parchment-printed version of the U.S. Constitution, suitable for framing. (See what this document looks like if you choose to mat and frame it)

3. Your choice of any volume of Free Men and Dreamers, autographed and personalized for the recipient of your choice.

HOW TO ENTER You can enter up to FIVE times, but each entry MUST be posted separately to be considered.


1.You must be, or become, a follower of this blog, by GFC or by email, to be considered.

3. Copy and paste the following graphic and caption for IN God is OUR TRUST onto your blog, Twitter, or Face Book page. Yuo'll get one entry for each posting.

"One Nation Under God Wasn't Left To Chance."