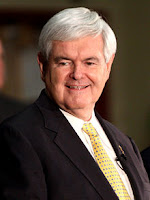 My son, Tom, wrote this editorial. No matter your political leanings, it offers some points about character that bear some serious thought.

Does granting forgiveness require us to erase all memory of lapses in character and fidelity, particularly when the subject is asking for the trust of a nation in order to become the most powerful leader in the world?

Newt Gingrich? Conservative? Really? I am shocked that so many Americans are willing to vote for a man that broke the most important vow of all, that of marriage, for more than six years. How can we expect this man to honor the oath of the office of the President of the United States when he can’t honor the more important oath of fidelity to a wife (or two wives for that matter)? As a devout Christian I firmly believe in the power of redemption; however, while I believe that a repentant man can attain full blessings in the life hereafter, this doesn’t mean that he deserves to be elected to the highest office in this life.

While I support Romney for President I would also be happy to see one of the other true conservatives in the Oval Office. Give me Santorum, give me Paul, but do not give me a man that lacked the capacity to be faithful in two separate marriages (not to mention that he was breaking the law of the state that he represented in Congress during his affairs – adultery is still illegal in that state). For that matter, while I disagree with a great number of Obama’s policies and ideas, as least he seems to be a man that honors his wife and family.

Again, while I fully believe the repentant man can be redeemed, there are certain things that one must forgo when he chooses to be untrue. The Office of the President of the United States is one of those.
Posted by Laurie LC Lewis at 6:52 PM