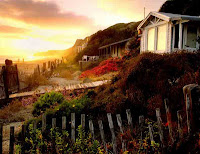 Tom and I just returned from a week in California enjoying family time and doing the touristy thing. No matter what we do or where we go, my eyes and ears are constantly on "book" alert, seeing new vistas as settings for future novels, memorizing off-beat experiences to insert into plots or to flesh out characters. This week provided so much rich material.

This pic is of an obscure California treasure--a pristine two-and-a-half-mile stretch of beachfront that remains virtually unchanged since the 1920's. A man named Irvine began buying up coast land for sheep ranching in the mid 1800's. During the next nearly 100 years the Irvine Company allowed squatters to camp on the land, and cottages began to be erected. In the roaring twenties, this area was discovered by Hollywood making this stretch the backdrop for seventeen films, including two versions of "Treasure Island," "To Have and Have Not," and "Beaches."

Japanese farmers leased the land and built a lovely community here, but in World War II they were sent to an interment camp in Poston, Arizona, and they never regained their homes.

Ranching continued on the lands, and in the 70's the Irvine Company sold the property to the state of California. Soon thereafter, the quaint cottages and their unique architecture landed the area a spot on the National Historic Register.

It's no surprise that large resort developers sought this prime real estate, and the California government approved the sale, but a third generation "Covist" whose family roots were deeply tied to Crystal Cove, resisted the move and took her fight to the state capital where she won. The land is now under the protection of the Park Service, and is a singular gem. There are pristine hiking trails where the native flora and fauna live peacefully without encroachment, and space for bathers, surfers, and hikers who want to see California as she was originally.

Let me tell you how absolutely romantic this place is--wild and free, beautiful and rough, with vintage cottages dotting the shoreline. There are photos of it back in its hey day when tent stakes criss-crossed the sand so summer nomads could enjoy the waterfront. Of the 42 original protected cottages, 17 have been restored to their vintage period and are available for rental. Seventeen more are awaiting funding before restoration can begin, and the others now serve as educational centers, park offices, and the home of the Crystal Cove Alliance--the organization that saved this treasure.

And so, I bet you want the name of this magical place, right? Yeah, I already gave it way. It's Crystal Cove, nestled between Newport Beach and Laguna Beach.

I fell instantly in love with this place, much as I did with Anna Maria Island some ten years ago. And like that Florida beach land which became the setting for "Awakening Avery," I'm looking forward to setting a book here. I've now got three books in progress. Focus, Laurie, focus!
Posted by Laurie LC Lewis at 12:51 PM